Be ready to fight polls alone: Nadda to cadres 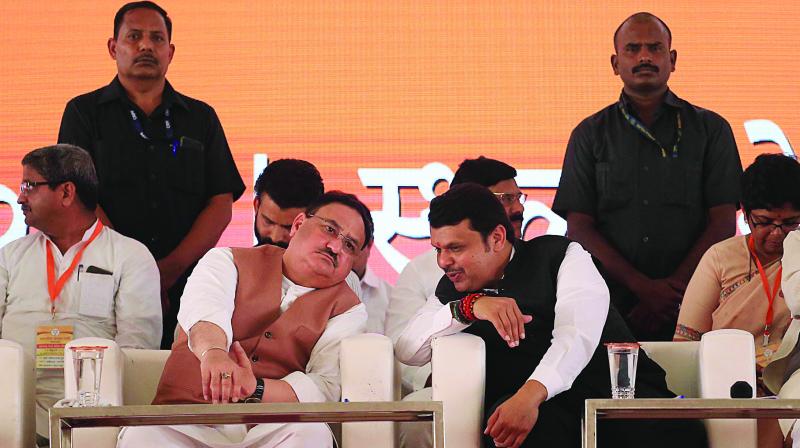 BJP chief J.P. Nadda and leader of Opposition in the Vidhan Sabha Devendra Fadnavis at the BJP meeting in Nerul on Sunday. (Photo: Asian Age)

Mumbai: Forced to abandon power by the three-party alliance of Shiv Sena, Nationalist Congress Party and Congress in the state, the BJP on Sunday vowed to come back to power on its own. The party workers should work as a competent Opposition party and bring the party back the power, said BJP national president J.P. Nadda.

Addressing the state BJP convention at Nerul in Navi Mumbai, Mr Nadda said the party needs to be ready to go solo in future elections. He said despite the BJP getting mandate after the state Assembly polls last year, some with ‘selfish motives’ parted ways with it and joined hands with those in the Opposition to come to power.

“The Maharashtra government is unnatural and unrealistic. Some people have parted ways with the BJP for their selfish gains,” Mr Nadda said without naming any party or individual. The BJP chief also alleged the government led by chief minister Uddhav Thackeray has put the brakes on the state’s development.

He, however, expressed confidence that his party will win the next Maharashtra Assembly polls on its own. “The BJP should be prepared to contest all the forthcoming elections on its own. You should be ready for ‘all versus one (BJP)’ kind of political battle in the future,” Mr Nadda said addressing the party workers.

“The BJP is going to win the next Maharashtra Assembly election single-handedly. The state, under the leadership of Devendra Fadnavis, was making progress but sadly, the development is now being halted,” he said.

The BJP emerged as the single largest party in the state after the Assembly polls in October last year. But, it failed to form government after the Thackeray-led Shiv Sena snapped ties with it over the issue of sharing the chief ministerial post.

The Shiv Sena later forged an alliance with the ideologically-at-odds Nationalist Congress Party and Congress to form the Maharashtra Vikas Aghadi government in the state.