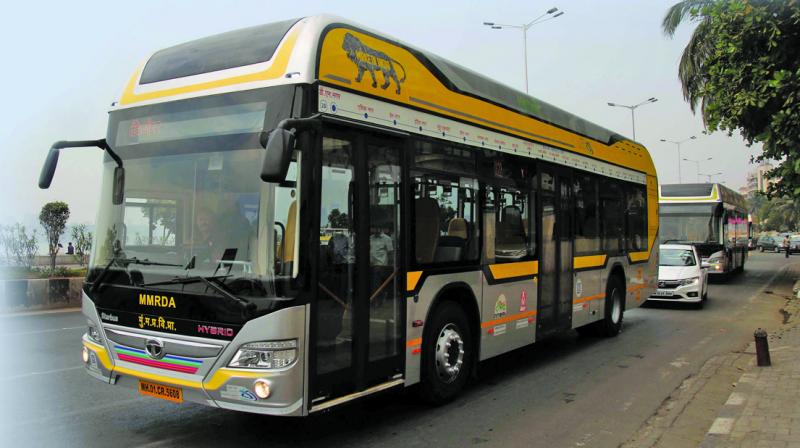 The buses run on diesel and electric power and were purchased under the MMRDA's initiative to promote clean fuel. (Photo: Rajesh Jadhav)

Mumbai: A set of 25 air-conditioned hybrid buses will commence their services from Borivali, Mulund, Thane and Kharghar to BKC from Monday. A few local services within the business hub began from Friday. Chief minister Devendra Fadnavis launched the buses on Friday at Malabar Hill in South Mumbai. The buses are going to provide point-to-point service for long distance commuters at designated timings in the mornings (7.30 -8.30 am) and evenings (6 pm- 7pm).

Along with this, a local shuttle service will also ply in BKC to ferry commuters to Bandra, Kurla and Sion. The buses were purchased by the Mumbai Metropolitan Region Development Authority (MMRDA) at a cost of Rs 50 crore. Moreover, the operation of the buses has been handed over to the Brihanmumbai Electric Supply and Transport. (BEST).

There will be five trips, every 15 minutes, from Borivali starting at 7.30 a.m. There will be four trips each starting at 7.30 a.m. from Thane, Mulund and Kharghar. Through the BEST mobile app, commuters can also track real-time updates about the bus and available seats.  “These buses will cut the carbon emission by 30 per cent and are equipped with multiple facilities,” said UPS Madan, Metropolitan Commissioner, MMRDA.

The buses run on diesel and electric power and were purchased under the MMRDA's initiative to promote clean fuel. The battery of the bus will be recharged while the engine is running and its electronic braking system generates power each time the driver applies brake.

“These buses are air-conditioned, comfortable and have multiple facilities such as wi-fi, USB connection, FM Radio, among others. I am sure, these facilities will attract people who will be able to work from the buses and would be encouraged to leave their cars at home to help the environment”, said Fadnavis.  Fadnavis further stressed on introducing 100 per cent of electrical mobility in the state, also a charging policy will be made shortly for the same. 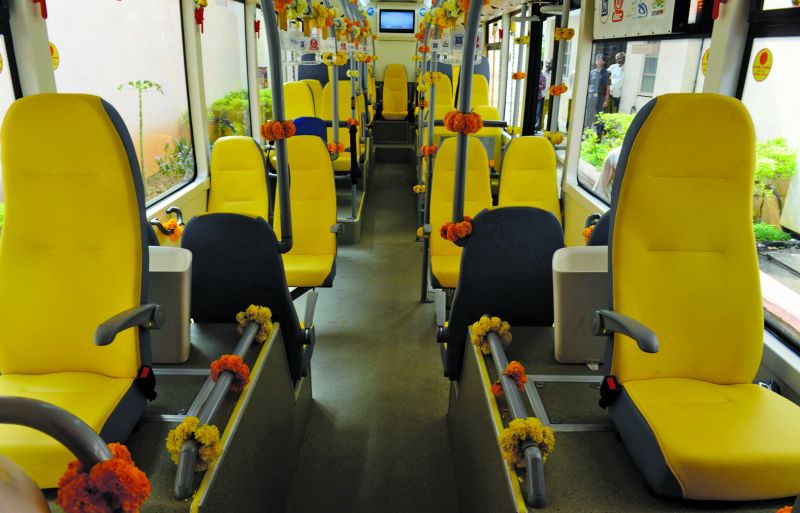 The buses are there to discourage private vehicles.

The fare on the routes; Borivili, Mulund, Thane and Kharghar to BKC, vary from minimum of Rs.63 to the maximum of Rs.110. The fare on the local routes within BKC will vary between Rs.16 to Rs.26.

Transport authorities want to make over 50,000 office-goers who travel to BKC daily choose public means of transport to decongest the business hub and reduce vehicular pollution. The Kherwadi flyover was expected to decongest the traffic but it has not, said sources. A survey seeking suggestions from commuters was conducted to decide the route of the hybrid buses.

“The main aim behind launching such bus facilities is to encourage the private vehicle owners to take up the public transport, so that there are fewer vehicles on  road leading to lesser vehicular traffic  and pollution,” said a senior MMRDA official. According to officials, daily more than 50,000 commuters travel to BKC from different parts of the city. “We had undertaken a survey wherein the office workers in the BKC were given google forms to understand the pattern of their commute. Majority of them who responded were from Borivali, Thane, Mulund and Kharghar and so we decided to start hybrid services from these areas,” added the official.

Meanwhile, commenting on the road traffic, CM Devendra Fadnavis said, “We are constructing Kalanagar flyover to reduce the traffic woes, but the more roads we build, the more vehicles will be on the road. Thus, the solution is public transport.”