Metros   Mumbai  17 May 2018  Worker charred in a fire at leather unit in Vasai
Metros, Mumbai

Worker charred in a fire at leather unit in Vasai

The unit operated only during the day shift and Javed apparently stayed back in the premises after duty hours. 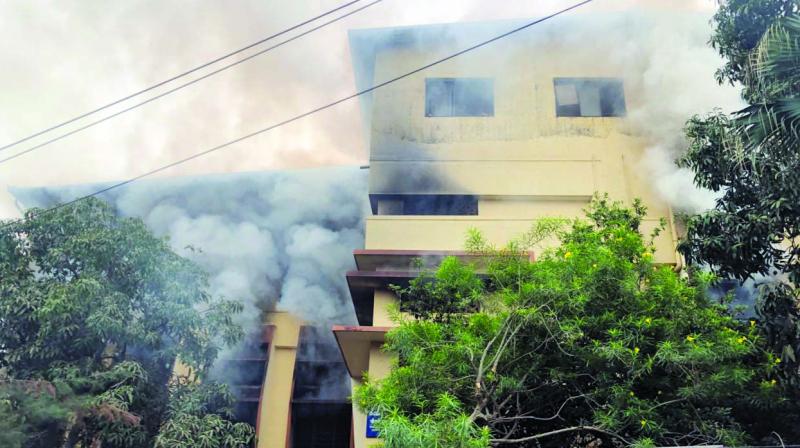 The fire brigade team doused the fire after a four hour operation.

Mumbai: A 40-year-old worker was charred to death after a fire broke out in footwear manufacturing unit located at an industrial zone in Sativali village in Vasai on Wednesday. According to officials in Vasai-Virar Municipal Corporation's fire brigade department, the fire was reported from the manufacturing unit, “Choudhary International Private Limited' at around 4.30 am. The fire brigade team doused the fire after a four hour operation.

“After receiving the call, our personnel rushed to the spot and doused the blaze after fire fighting operation which lasted for nearly four hours.” said chief fire officer, Dilip Palav. Five fire tenders and two jumbo water tankers were mobilized to control the fire. During cooling operations, the fire fighters spotted a body which was charred beyond recognition. The identity of the deceased was later ascertained as Javed (40),  an employee of the unit that makes and exports pure leather footwear and other allied products.

The unit operated only during the day shift and Javed apparently stayed back in the premises after duty hours. His body has been sent for an autopsy. While the exact cause of the blaze was yet to be ascertained, the Vasai police is conducting further investigations into the matter.