Four fire engines, a rescue van and ambulances were rushed to the spot and 15 people were rescued from the debris, said the BMC 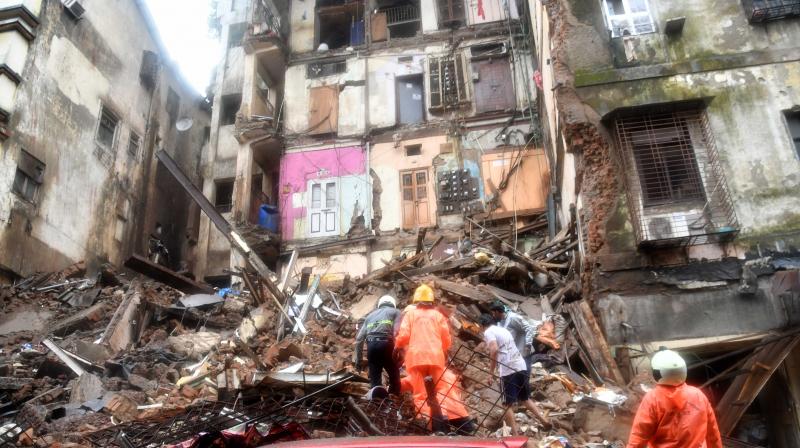 Four people died and several others were injured in two incidents of building collapse in Mumbai on Thursday as rains lashed the city, officials said.

While two persons died after a portion of a `chawl' (tenement) collapsed in suburban Malvani, two others were killed after part of an old building collapsed in south Mumbai's Fort area, civic officials said.

The Bhanushali Building on Mint Road in Fort had been already declared as dangerous, officials said.

A part of a three-storey chawl in Malvani Gate Number 5 area in the western suburbs collapsed around 2.30 pm, a fire brigade official said.

Four fire engines, a rescue van and ambulances were rushed to the spot and 15 people were rescued from the debris, said the Brihanmumbai Municipal Corporation (BMC).

While two persons died, 13 others were injured, said a BMC official, adding that the injured were sent to a private hospital in Malad East and discharged after treatment.

The building had been partly vacated for repairs by Maharashtra Housing and Area Development Authority (MHADA), BMC sources said.

The injured persons were taken to the state-run J J Hospital.

One person was still feared to be trapped and efforts were on to rescue him, the municipal commissioner said.

In 2019, MHADA had applied for `Intimation of Development (IoD) which the BMC granted, and thereafter it was MHADA's responsibility to get the building vacated and repair it, Chahal said.

MHADA had informed that repair work had stopped due to the coronavirus outbreak and three out of 12 tenants had returned to the building after vacating initially, he said.

Pednekar told media persons that the building had been declared as `C1' category, which means dangerous building, and BMC had served notices regarding it.

It was a `cessed' building, officials said. Cessed buildings are old private buildings which are maintained by MHADA by charging `cess'.