The police had submitted his mobile, laptop and desktop for analysis, but the delay in the reports has stopped the progress. 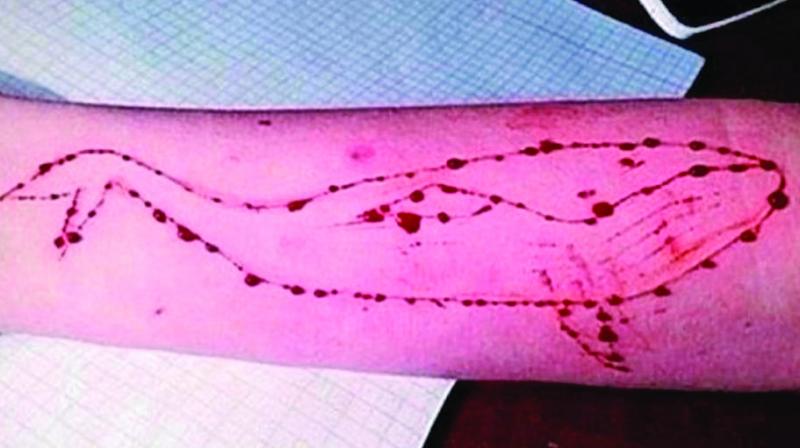 Picture used for representational purpose. A ‘photo’ of a blue whale cutting on the arm of a person allegedly playing the online game. (Courtesy: The Siberian Times)

Mumbai: The wait for forensic reports from the Forensic Science Laboratory located at Kalina, Santa Cruz east has slowed down the probe into the alleged suicide of 14-year-old Manpreet Singh, who jumped off the seventh-floor terrace of his building in Andheri east on July 31. The police had submitted his mobile, laptop and desktop for analysis, but the delay in the reports has stopped the progress. Meanwhile, Meghwadi police have investigated the case considering other angles like peer pressure and depression, but to no avail.

The officers investigating the case have said that despite submitting the main evidences for analysis, the forensic experts have been delaying the release of reports, hampering the progress in the suicide case of the teenage, who is suspected to be a participant of the online game, ‘Blue Whale Challenge’. Until now, the officers have questioned the deceased’s friends, who have claimed to have had a conversation with him about a game consisting of a few tasks, and ultimately be ‘free’ from problems, couple of days before he allegedly committed suicide.

Navinchandra Reddy, Deputy Commissioner of Police Zone 10 said, “The police has questioned his friends and family, along with school authorities, but have not found any lead so far.”

The officer added that one of Manpreet’s close friends had said that minutes before jumping, the deceased had told his friend that he was going towards the terrace, but since Manpreet was known to have a sense of humour, the friend had not taken him seriously and had just replied with a smiley.

With so many clues pointing towards Manpreet’s association with the game, the police are now just awaiting an official nod from the forensic team.