Govindas break bones as well as handis this year

Despite HC order on safety, 117 end up with fractures. 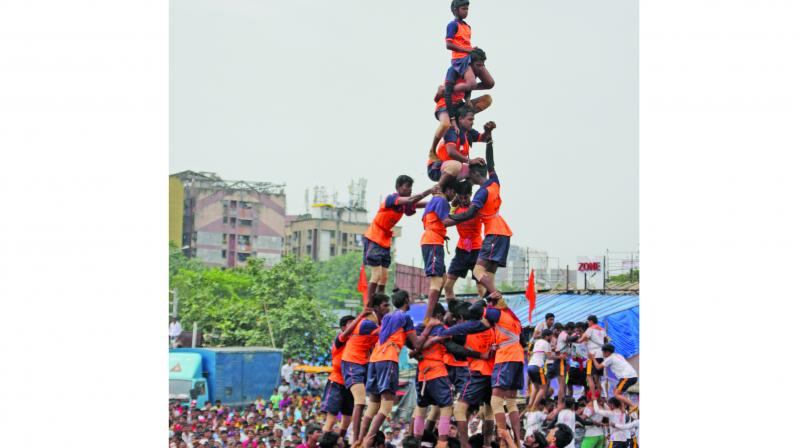 The high court stressed precautions like safety nets to reduce the impact of a participant falling.

Mumbai: Most of the 117 Govindas — Dahi Handi participants — who suffered several injuries during the Tuesday celebrations of ‘Janmashtami’ in city had sustained fractures. This was despite the fact that as per the government orders, enough precautions including the use of knee-pads and chest-pads had to be used.

Fifteen Govindas are admitted in several hospitals of the city for treatments mostly sustaining with fracture injury, 187 were discharged on Out Patient Department (OPD) and 15 are admitted in hospitals and treated for injuries. Two 'Govindas' - one each in Palghar district and Airoli in Navi Mumbai - died in ‘dahi handi’-related incidents.

Dr Avinash Supe, dean of KEM Hospital and director of medical education and major hospitals, said, “The number of injured Govindas has reduced from last year. The Govindas are mostly coming with injuries such as fractures, but a few have head injures,” he said.

The High court however stressed on the need to take precautions like safety nets, belts and cushions to reduce the impact of a participant falling. The court also ordered the implementation of precautionary measures like a stand-by ambulance.

S even-year old Pawan Vhwakarama fell down from the second tier of a human pyramid and is  receiving treatment at the civic-run Sion hospital. According to his parents, despite their  opposition, the local Dahi-mandal organisers had allegedly taken their son for participation though there is a court-imposed ban on participation of kids below 14.

Female ‘govinda’ Sonal Surve (17) also sustained head injuries after she fell off from the second tier of a human pyramid erected by a Dahi-mandal she is a part of. Surve refused to give details about her residential address. Surve was admitted in the trauma ward in a civic-run Sion hospital. Surve was in a troupe of girls Govinda pathak and had a fall from the second tier of human pyramid.