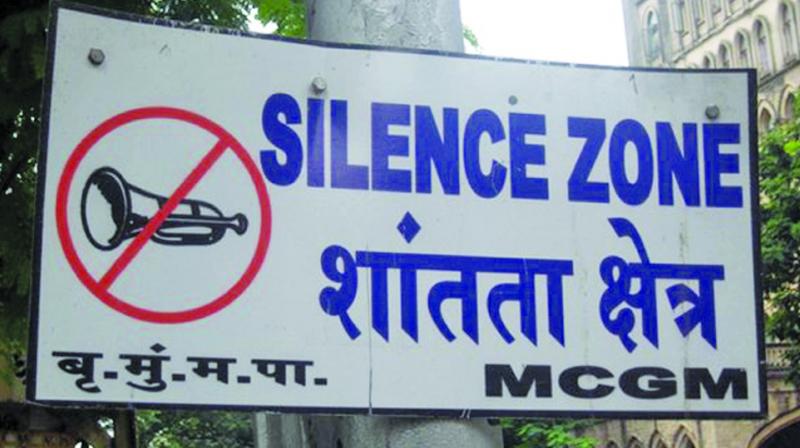 A poster of silence zone in south Mumbai.

Mumbai: The Maharashtra government on Wednesday filed an affidavit in the Bombay high court saying that from August 10, no area of the state will retain the status of being a silence zone till the state issues further notification specifying the silence zones.

According to the state, the Union government recently issued a gazette on the amended Noise Pollution Rules, which has given the state powers to decide silence zones in their territory and this gazette came into effect on August 10.

However, the HC has specified that till the state government issues a further notification specifying silence zones, the court’s earlier orders pertaining to noise-restriction around places like hospitals, religious places, educational institutions and courts, will remain in force. It has asked the state to file a compliance report on observance of its earlier orders related to noise restrictions during Tuesday’s Dahi Handi celebrations as it was observed during this period when there were no specified silence zones, as per the government.

A division bench of Justice Abhay Oka and Justice R.I. Chagala was hearing the compliance of its order, which were given by the court while hearing bunch of petitions filed against noise pollution in the state.

Advocate General Ashutosh Kumbhakoni submitted affidavit of Archana Shirke, an under secretary of the state environment ministry before the court and also informed it about the centre’s official gazette.

The affidavit stated, “On August 10, the union ministry of environment, forest and climate change had issued an official gazette which stated that Noise Pollution Rule of 2000 has been substantially amended”. If further stated, “As per the amended rules, any area cannot be considered as a silence zone until and unless specific declaration to that effect is made or issued by the state government.”

After hearing this court specified that till the state government issues a notification in this regard, their earlier order of noise pollution will remain unaffected and asked the state to file compliance report of its order during the Dahi Handi festival.

Meanwhile, Sumaira Abdul Ali of Ahwaz foundation informed the court that two violations occurred during Dahi Handi festival in Mumbai. The court asked petitioners to go through state’s affidavit and file a reply. It has kept the matter for further hearing on August 22.