The launch of the mini buses was expedited ahead of implementation of the code of conduct for the state Assembly elections. 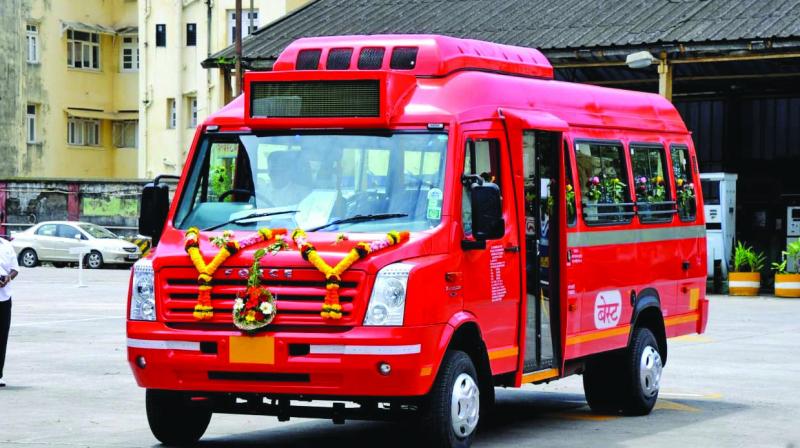 Mumbai: Mumbai has finally got the first set of mini BEST buses to ply on city roads, with the Brihanmumbai Electricity Supply and Transport (BEST) Monday launching six mini air-conditioned (AC) buses at the hands of Shiv Sena chief Uddhav Thackeray at the BEST headquarters in Colaba.

The 21-seater mini buses are part of the BEST’s plan to induct 400 mini buses in its fleet through wet leasing. “These mini-buses have a capacity of 21 seaters and 7 standees and will ply on feeder routes eg. from railway and metro stations to colonies. This will provide last mile connectivity to lakhs of commuters in the city and suburbs,” said BEST spokesperson Hanumant Gophane.

Although the routes for these mini buses have not yet been finalised, they will include busy station areas like Prabhadevi, Lower Parel, Malad and Goregaon. A significant number of buses will be deployed on the CSMT-Fort-Nariman Point and Churchgate-Nariman Point-Cuffe Parade routes.

Mr Thackeray applauded the BEST and BMC administration for the launch of these mini buses through wet leasing. “It will not only attract more commuters but will also give tough competition to cab aggregators like Ola and Uber. We have to bail out BEST from its current precarious condition and such steps will prove useful,” he said.

Mr Gophane said, “The rest of the mini buses are expected to be launched by January 2020. The BEST will pay the private company FORCE Rs 57 per km depending upon the running.”

The launch of the mini buses was expedited ahead of implementation of the code of conduct for the state Assembly elections.