However, an FIR was registered on Monday even as a local MNS leader made the accused apologise on social media. 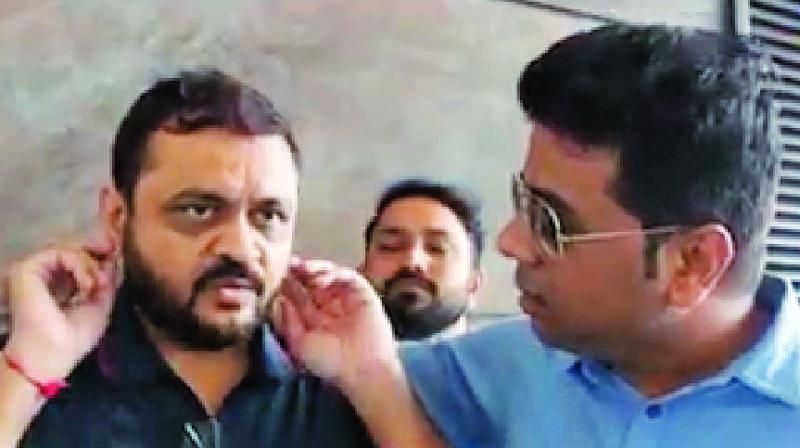 Mumbai: A fight that started five days ago over keeping a residential building’s elevator engaged for a prolonged time at Naupada in Thane has become a full-blown political issue.

The Naupada police station had registered a non-cognisable (NC) complaint on September 11, when a 38-year-old Maharashtrian man, Rahul Paithankar, was assaulted and allegedly abused by a Gujarati man, Hasmukh Shah. for keeping the elevator of a residential building engaged for prolonged time.

However, an FIR was registered on Monday even as a local MNS leader made the  accused apologise on social media.

Maharashtra Navnir-man Sena (MNS) leader Avinash Jadhav posted a video on Facebook in which Shah is seen apologising to all Marathi-sepaking people.

Mr Jadhav is seen mentioning in the video that he is following his leader Raj Thackeray’s order of not assaulting anyone on camera adding that he would teach Shah a lesson in ‘MNS style’. There was no clarity on what ensued after the video was shot.

On September 11, the CCTV camera in the lobby of the Suyash Apartment captured Mr Shah slapping Mr Paithankar at around 5.40 pm. Shah hurled abuses at Mr Paithankar for holding the elevator on the fifth floor for letting his father inside. Mr Paithankar allegedly objected to the abuses and sought an explanation soon after which Shah attacked him. The video also shows Mr Paithankar making frantic calls after the security guards intervened and stopped the assault.

Mr Paithankar approached the police, who lodged an NC in the incident. The victim claimed that Shah allegedly abused him saying, ‘Tum ghaati Naupada me rehene ke layak nahi’ (You plebes do not deserve to live in Naupada area).

“In his complaint Mr Paithankar had stated that Shah stopped him from leaving with his father to Thane station and began assaulting. He also said that Shah alleged that he would get back to him later when Pranay also joined the attack. We are investigating the incident,” said an officer of Naupada police station.

The police will record statements of the witnesses and the security guards. The officials are also probing if there was any precursor to the alleged incident.

A case has been filed against Shah under sections 341 (wrongful restraint), 352 (assault or criminal force), 323 (causing hurt), 506 (criminal intimidation), 504 (provoking breach of peace) and 34 (acts of common intention) of the IPC and further probe is underway.