The bus driver, Ramesh Patil, is also being treated at Guru Nanak Hospital after sustaining injuries. 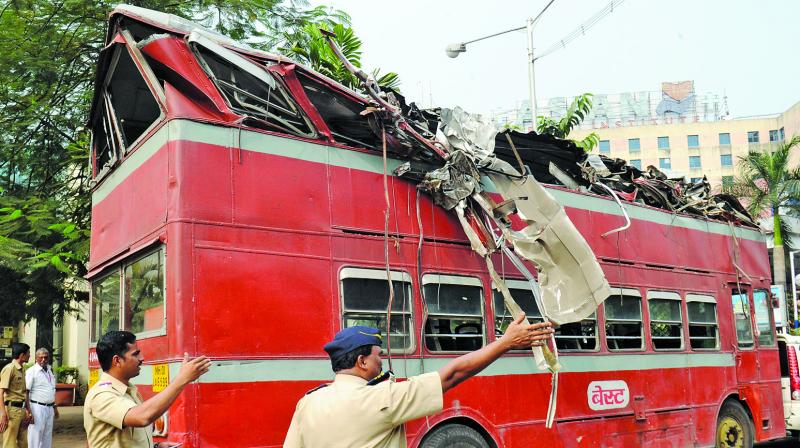 The double-decker bus that met with the accident at Bandra-Kurla-Complex on Wednesday. The entire upper deck of the bus was flattened and seven people sustained injuries in the incident. (Photo: Rajesh Jadhav)

Mumbai: Seven passengers were injured and admitted in Bandra’s Guru Nanak Hospital, Sion Hospital and Bhabha Hospital after a Brihanmumbai Electric Supply & Transport (BEST) double-decker bus on route 310 met with an accident near the family court located in the Bandra-Kurla-Complex.

The driver of this double-decker bus was trying to overtake another double-decker bus and, in the process, smashed the vehicle into a tree on the divider of the road. The conductor of the bus, Sanjay Hira, said that no one, including the driver, had expected that there would be a tree in the middle of the road.

The accident took place at 12.40 pm. The bus driver, Ramesh Patil, is also being treated at Guru Nanak Hospital after sustaining injuries.

The conductor of the bus said, “I am at the police station giving my statement. According to what I remember, we were overtaking another double-decker bus and we took a right because traffic on the left lane was too slow. But when we took the right to switch lanes, we heard a big crash. We didn’t know what had hit us, and when I leaned out, there was this big tree on the divider, the branches of which had grown too large and infringed on the road. There was no way we could have known that such a big tree was placed right at the divider.”

BEST came out with a statement after the incident, saying: “The bus was proceeding from Bandra (east) to Kurla station… (After the accident) the front upper-deck portion of the bus was damaged and its glass window broke. Seven passengers were injured… five passengers are being treated at Gurunanak Hospital in Bandra and two passengers passengers at Bhabha Hospital in Kurla.” The police registered an FIR against Ramesh Patil, the driver of the BEST bus, and arrested him.  He secured bail.