The police had informed the HC that Nikam, who had been released on surety bail, had been absconding for 20 days. 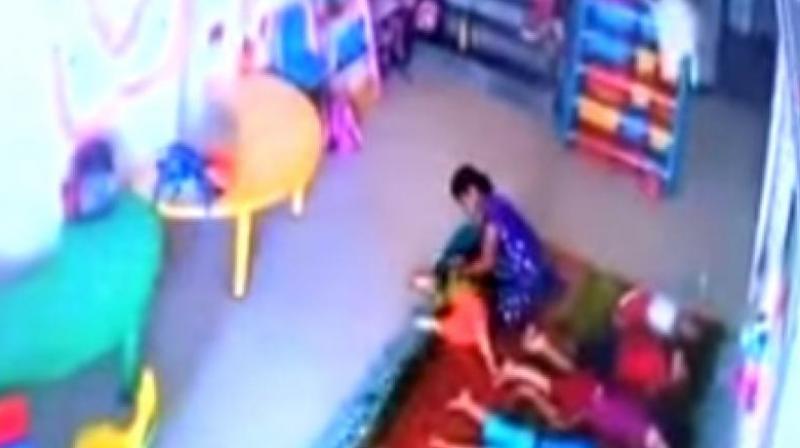 In the video, Sheikh is seen hitting, throwing and kicking the child. (Photo: Youtube Grab)

Mumbai: The Navi Mumbai police on Friday arrested Priyanka Nikam, owner of the creche owner of the Kharghar creche where a 10-month-old girl was trashed by the caretaker, a day after the Bombay high court rejected her anticipatory bail application.  The police had informed the HC on Thursday that Nikam, who had been released on surety bail days after the incident, had been absconding for 20 days.

In November 25, CCTV footage of a 10-month-old infant girl being brutally trashed by Afsana Sheikh (42) a caretaker at a creche owned by Nikam, came to light. The Kharghar police then booked Sheikh and Nikam for attempt to murder and under sections of the Protection of Children from Sexual Offences Act.

While Sheikh was remanded to police custody, Nikam was released on surety bail and asked to appear before the police every day. “But she failed to do so and we started looking for her and found her to be absconding. We then heard that she had applied for anticipatory bail at the high court. So we submitted that she had been absconding and even her father who is the surety did not have a clue to her whereabouts,” said an officer from the Navi Mumbai police. After the HC rejected her bail application, the Navi Mumbai police arrested her. Commissioner of police Hemant Nagrale informed that she had been arrested and booked for attempt to murder. “She was produced in court and remanded to custody,” Mr Nagrale said.