Pvt bus catches fire with 25 on board, none hurt

Personnel from the Mira-Bhayandar Municipal Corporation’s fire brigade reached the spot and doused the fire. 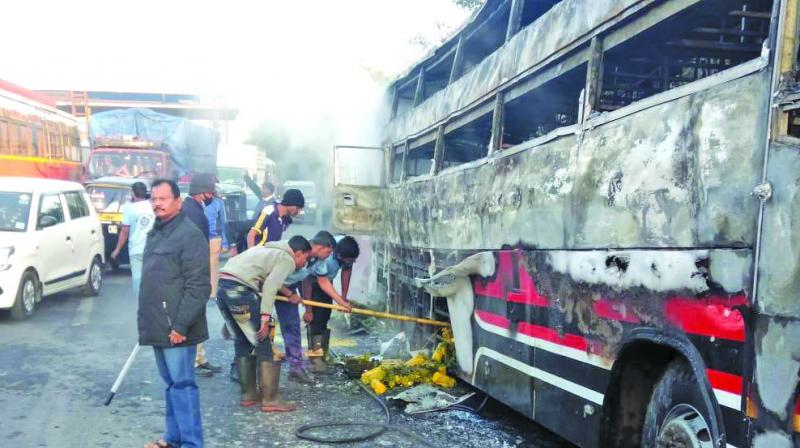 The bus caught fire near the toll post at around 6.45am.

Mumbai: Around 25 passengers and crewmembers of a private luxury bus had a miraculous escape after the vehicle caught fire near the toll collection post on the Ghodbunder-Thane road in Kashimira at around 6.45 am Friday.

The Amreli registered bus (GJ:14:X3140) was headed towards Thane from Ahmedabad in Gujarat via the state highway when an auto-rickshaw driver spotted a burning tyre in its rear and alerted the driver who stopped the vehicle and immediately helped evacuate the bus with the help of the conductor. Fortunately, none of the passengers or crewmembers were injured.

Personnel from the Mira-Bhayandar Municipal Corporation’s fire brigade reached the spot and doused the fire. However by then the bus was charred beyond recognition, including the belongings of the passengers kept on the inner racks and the luggage compartment.

The flames spread to the entire bus and destroyed it completely even as the passengers and crewmembers watched helplessly. Though the exact cause is yet to be ascertained, it is suspected that the friction between the wheels and the road in the heat caused the fire, officials said. The incident led to a traffic snarl. However traffic police personnel from the Kashimira unit reached the spot and ensured smooth vehicular movement.