Residents claim that despite having identity and address proofs, their houses have suddenly been declared illegal. 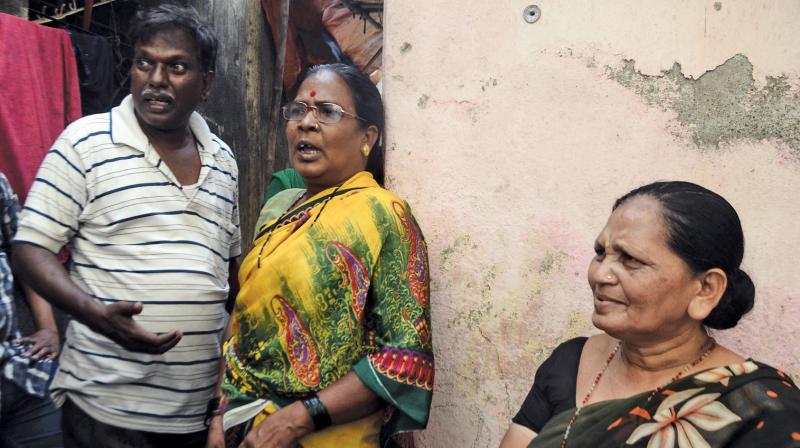 Tulsiram Bhagat and his wife Gauribai with her cousin Laxmi.

Mumbai: Residents of Dighe, who came on the railway tracks on February 13 including adivasis, have said that they are caught in a political crossfire. Dighe, like most of Navi Mumbai, is a stronghold of the NCP but the residents have claimed that battle of one-upmanship between BJP, Sena and NCP has led to them being homeless. Over 200 residents from three buildings were forced to vacate their houses on February 13 as Navi Mumbai Municipal Corporation (NMMC) sealed the buildings deeming them illegal.

The residents said that they have electricity bills, voting card and have been  paying property tax, but were suddenly declared illegal.

Tulsiram Bhagat (56) and his wife Gowribai Tulsiram Bhagat (51) are the fifth generation of Adivasi’s whose forefathers were part of the workforce which built the Dighe-dam. The family has since February 13, taken a small one room on rent and are living there with five more family’s members.

With a desperate tone in her already crackling voice Gowribai said, “By the evening of the 13th we had our, utensils, favourite sarees, my grandchildren’s toys strewn across the footpath on the main Thane-Belapur road.” She further adds, “In the past five days I have lost all the fight in me, seeing by son and daughter out on the street with me was my breaking point.”

Chiming with equal anguish Tulsiram said, “No political party has come to the fore, we haven’t received any help from anyone one. In fact we went down to chief minister Devendra Fadnavis’s home the night before our building were sealed, he made us wait until 1.30 am after which his personal secretary asked us to leave and come in the morning.”

Further recounting the experience he asked, “Desperate for an audience with him left at 6 am the next day, our children were kicked out on to the street by then, Mr Fadnavis finally met us and said that he cannot do anything, then why did take our votes? Weren’t we illegal then?” There are a total of 11 Adivasi families living in the Bhagatji building which was one of the three that was sealed by the NMMC.

More residents are awaiting their fate, after the three buildings were sealed on Monday, Pandurang, Bhagatji and Modeshwar, there is fear of the 25, 000 plus residents in gathering building as well.

Abhang Shine from Digha Ghar Bachao Sangharsh Samiti has said that their plight is not glamorous enough like that of the residents of Campa Cola who are still living in the their homes.

“We are a slum area, we are not educated and English speaking class like that of Campa Cola, so our shriek is not shrill enough, our anguish is not heart-wrenching enough, we will not earn enough browny points for political parties.” He further added, “But we are poor labourers, so no politician has come and stood with us when our houses were being sealed, this is the justice of the current powers be who have promised every one a home by 2022.”

According to a few NCP party workers that this paper spoke to, they feel that the targeting of Dighe in particular is nothing but a pressure tactic, of them said, “Dighe has always been a NCP’s bastion, the sena and the BJP have not been infiltrate these corners as much as they want to. Hence this is well thought out plan to sway votes as well as corporators to their side.”

Dighe is located two kms away from Arioli station on the Trans-Harbour line.