These were being smuggled into India without payment of customs duty and in contravention of provisions of the Customs Act, 1962. 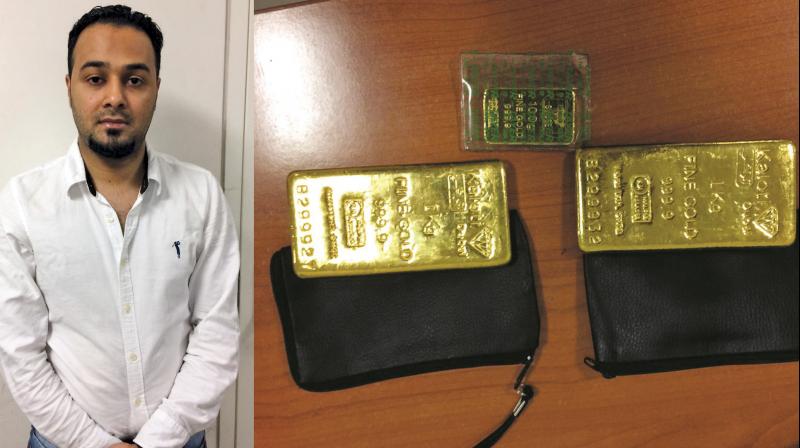 Goya Ahmad Siraj had hidden the 2.1-kg gold bars worth Rs 64 lakh in his trouser pockets.

Mumbai: In the first case of the year involving an insider in gold smuggling, an airline’s ground staff was arrested for smuggling gold at the Mumbai airport. Goya Ahmad Siraj A, who landed in Mumbai aboard Saudi Arabia airline’s SV 772, was carrying three gold bars weighing 2.1 kilogram worth Rs 64 lakhs.

Based on profiling, the Air Intelligence Unit (AIU) officers intercepted the Saudi Arabian national who had arrived from Jeddah. His personal search resulted in the recovery of two gold bars of one kilograms each and one gold bar of 100 gram. These gold bars are valued at Rs 63, 71,400. The passenger had concealed the gold bars in black coloured pouches kept in pockets of trouser worn by him. They were recovered and seized under the provisions of the Customs Act, 1962.

Custom officials said that the passenger in his statement (recorded under the sec. 108 of the Customs Act, 1962) admitted to the knowledge, possession, carriage, concealment and recovery of the said gold bars.

These were being smuggled into India without payment of customs duty and in contravention of provisions of the Customs Act, 1962.

“The passenger who is employed in Saudi Arabian Airlines Ground Services, in his statement has further admitted that out of the above 2.1 kilograms of the seized gold bars, two kilograms of gold belongs to him and 100 gram belongs to his cousin Mr Fahid Ali, who too is a citizen of Saudi Arabia. Hence he was arrested,” said an AIU official.

However, a Facebook post went viral on Friday stating that the two kg, 100 gram gold was recovered from the wife of an IPS officer, Mr Sada Date. However, the AIU denied the same.