Maitri building in Kalina has nod to build only three floors, but is a twelve-storey bldg now. 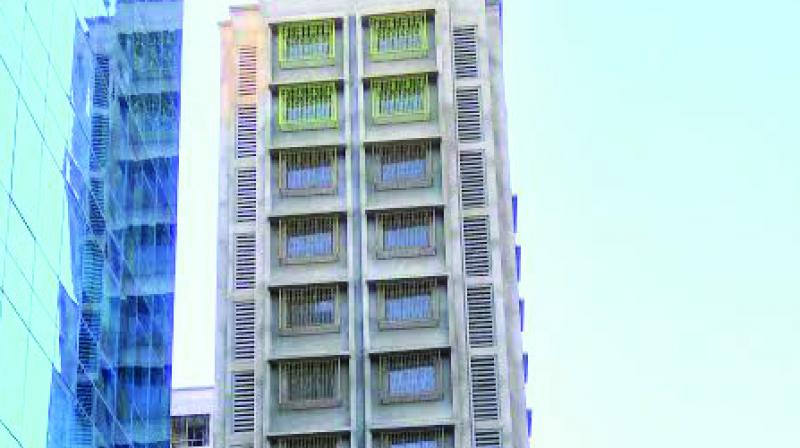 The Maitri building in Kalina.

Mumbai: The Brihanmumbai Municipal Corporation (BMC) has allegedly failed to take action against Maitri building, a residential complex that stands tall in Kalina with nine unauthorised floors, above the three authorised floors, despite repeated complaints from a local ex-corporator and activists, since September last year. An RTI, filed by city-based activist Anil Galgali, reveals that 84 allottees of the building are officials from the Maharashtra state government.

There are in total three wings to Maitri building, of which two were supposed to be two floors high, while one was permitted to go up to three floors. However, all of them are now 12-storey, which means there are a total of 29 unauthorised floors to the three wings combined.

According to ex-corporator of the Kalina area in Santacruz (east), Brian Miranda, the building plans for Maitri were made and sent to BMC for approval in 2013. Currently, all wings of the building have 12 floors, not authorised by BMC. While the construction of the building is complete, the apartments in it will soon be handed over to the allottees. Mr Miranda said, “In the midst of all this, to regularise the remaining floors of the building, the proposal has been sent to municipal commissioner Ajoy Mehta.”

An RTI reply dated February 2017, filed by activist Mr Galgali reveals that the construction of the building was handed to the firm BG Shirke, at a cost of Rs 36.50 crore. The reply to the RTI application reveals that the allottees include IAS officers such as Sudhir Thackeray (now retired) and IAS officer Harshadeep Kamble, among 81 other names.

However, the officers named above have said they are only incidental third parties in a government project. Mr Sudhir Thackeray, who retired from service in 2012, said, “I am an allottee for a house which is part of a government project, because I was a government servant. I had applied for a house, and paid a nominal fee to wait in queue until the government can allot me a home in Mumbai, where I worked at that time. This is as per rules. The government allotted me a house in Maitri, and I have been waiting to get possession of it. I know nothing of the legality of the place. I am a third party.”

When The Asian Age asked BMC chief Mr Mehta why action hasn’t been taken so far against the contractor, he said the decision is pending. He further said, “No decision that is outside of the law, will be taken in regards with the matter.”

Repeated attempts to contact BG Shirke, did not get a response.