Maharashtra under scanner for CRZ violation

The court warned the public works department (PWD) that in the absence of such permission, it would issue direction to demolish the office. 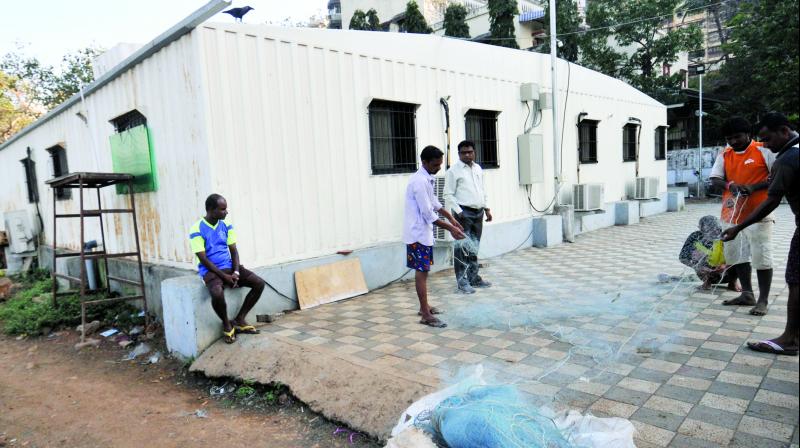 Fishermen outside the office set up to oversee the Shivaji Maharaj memorial project.(Photo:Debashish Dey)

Mumbai: Bombay high court on Friday directed the Maharashtra government to inform within two weeks if it had permission and a no objection certificate (NOC) from coastal regulation zone (CRZ) authorities to set up temporary office at Cuffe Parade to oversee construction of the Shivaji Maharaj memorial in the Arabian Sea off the Mumbai coast. The court warned the public works department (PWD) that in the absence of such permission, it would issue direction to demolish the office.

A division bench of Chief Justice Manjula Chellur and Justice G.S. Kulkarni was hearing a PIL filed by a group of fishermen staying on the plot adjacent to the one where the office had come up.

Senior counsel Mihir Desai along with advocate Mrunalini Panchal argued before the court that there were around 1,500 fishermen families residing at the said place who were engaged in fishing since past 100 years. According to the petitioners, the government in 1979 reserved this plot for housing for fishermen but in the 90s when MMRDA became the planning authority, the plot was re-reserved for government housing.

Advocate Desai told the bench that the petitioners came to know about the change much later and were hence challenging both change in reservation and construction of the said office as fishermen had come to ply their boats from this side and their passage was obstructed by the office.

The bench was not convinced with this argument. However, it noted that the office fell under CRZ and questioned Hiten Venegaonkar, counsel for PWD over the same.

Justice Chellur said that if no permission was seeked, the court would issue direction to demolish the office.