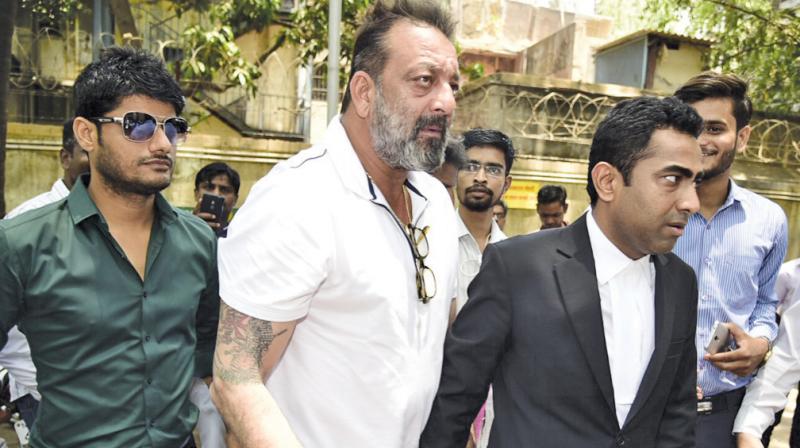 Sanjay Dutt outside the court in Andheri. (Photo: Mrugesh Bandiwadekar)

Mumbai: The Andheri metropolitan magistrate court on Monday cancelled a bailable warrant against actor Sanjay Dutt that had been issued last Saturday for non-appearance in hearings related to a case filed by a Bollywood film producer.

Shakeel Noorani, the producer, had filed a private complaint against Dutt in 2013 pertaining to alleged criminal intimidation. Mr Noorani alleged that he had started getting threat calls from the underworld at the behest of the actor.

Dutt appeared before the court two days after the warrant was issued. He also filed a warrant cancellation application, which was later accepted by the court. Mr Noorani alleged that he had signed a film named Jaan Ki Baazi with Dutt but after receiving a signing amount `50 lakh, Dutt had completed only two days of his shooting and never appeared after that.

According to Mr Noorani’s lawyer Neeraj Gupta, when the producer filed a complaint with the magistrate court, Dutt was undergoing imprisonment in the 1993 bomb blasts case. But after being released from prison he never attended the court in spite of informing him. Therefore, the magistrate had issued a warrant against Dutt and kept the matter on August 29 for further hearing.

On Monday, Dutt appeared the court on after 12.30 pm. He wore a white T-shirt and blue denim.

After his lawyer Subhash Jadhav filed and application before the court to cancel the warrant, magistrate C.V. Patil asked Dutt to be present in court whenever he will be asked. The court then adjourned the matter till August 29.