Naxals call for bandh in Gadchiroli

Ramco and Durva were carrying rewards of Rs 16 lakh and Rs 4 lakh, respectively, on their heads, the police said. 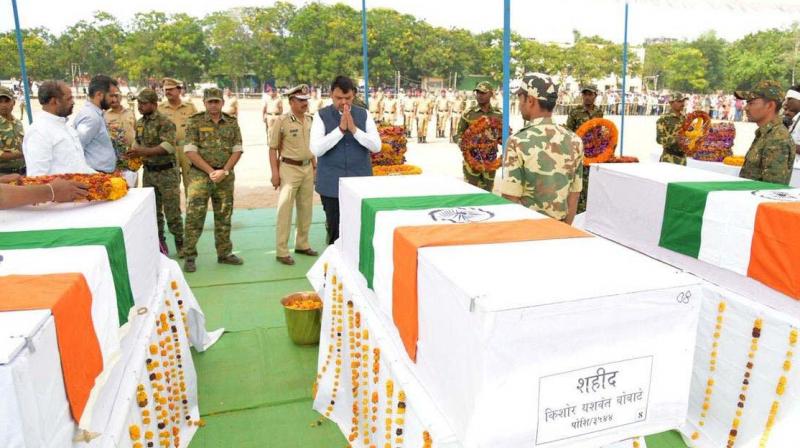 A file photo of chief minister Devendra Fadnavis paying his respects to the 40 jawans who were killed in the May 1 attack in Gadchiroli.

Mumbai: Naxals have called for a “bandh” in Gadchiroli district on May 19 to protest the killings of two women personnel in an encounter last month. They have put up banners in some villages in Etapalli tehsil of Gadchiroli, where they have given the bandh call.

The Naxals have also distributed pamphlets claiming that the May 1 attack on security forces, in which 40 jawans were killed, was carried out to avenge the Boriya-Kasnasur encounter in which the police eliminated 40 Maoists in 2018.

The banners and pamphlets were put up in Jambhiya and Gatta villages of Etapalli taluka, mentioning the encounter of Ramco alias Kamla Manku Narote (46) and Shilpa alias Manu Durva (29). Ramco was the divisional commander of the Gatta Dalam and one of the most dreaded Naxal commanders, wanted in the states of Maharashtra, Chattisgarh and Telangana.

An official from the Gadchiroli superintendent of police (SP) office Thursday said, “In the banners, the Naxals alleged that the killings of the women cadres, Ramco-Durva, by the security forces on April 27 was an infringement of their constitutional rights.”

“The ultras said in the banners that as a mark of protest against the encounter killings, a ‘bandh’ should be observed in Gadchiroli on May 19,” the official said. The two women Naxals were killed in an encounter in the Gunderwahi forest in Gadchiroli, when commandos of the C-60 squad, the police’s anti-Naxal unit, were combing the area.

Ramco and Durva were carrying rewards of Rs 16 lakh and Rs 4 lakh, respectively, on their heads, the police said.

Durva was a member of the Bhamragad Dalam, who was carrying a reward of Rs 4 lakh on her head, he said. Ramco was married to Bhaskar, a Naxal “commander”, the official said, adding that the police had intensified anti-Maoist operations in the district after the encounter.

The Naxals carried out an Improvised Explosive Device (IED) blast and opened fire on the commandos, leading to a gun fight, the official said. After the rebels fled, the bodies of two women Naxals were found.