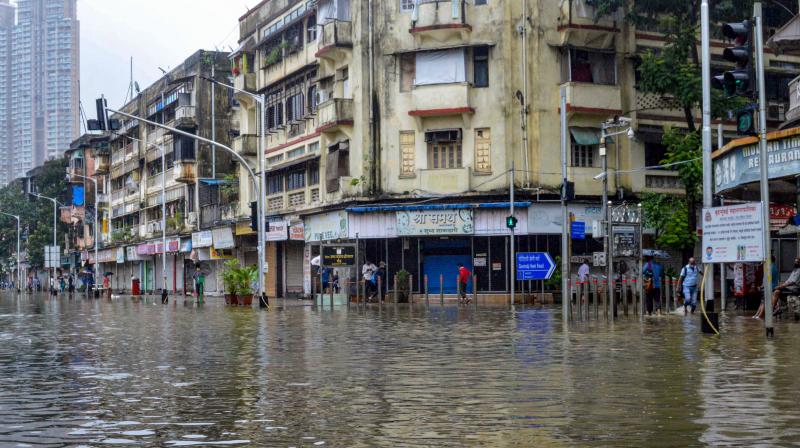 Twelve people died as a compound wall came crashing down on some houses after a landslide at Bharatnagar Vashi Naka locality in Mumbai's Mahul area, a fire official said.

The retaining wall collapsed at 1 am, he said. Two people were injured and taken to nearby Rajawadi hospital from where they have been discharged after preliminary treatment, he added.

Three hutment dwellers were killed as five shanties collapsed after a landslide following incessant overnight rains in Mumbai's Vikhroli suburb at 2.30 am, a civic official said. Two persons were injured and were sent to a nearby hospital, he added.

The suburban  train services on both Central Railway and Western Railway in the financial capital were suspended due to waterlogging in the tracks due to the overnight heavy downpour, railway officials said.

The India Meteorological Department (IMD) has issued a red alert for Mumbai in the backdrop of heavy rains, a BMC official said.

A sudden change in climatic conditions led to Mumbai witnessing over 100mm rainfall in six hours, the IMD said in an early morning bulletin. It also changed the rains forecast for the city from orange to red alert.

The IMD said that till 6.30 am on Sunday, Mumbai and adjoining areas received over 120mm rainfall in preceding 12 hours.

Mumbai would receive ‘heavy to very heavy’ rainfall at a few places with extremely heavy rainfall at isolated places, the IMD said.

Extremely heavy rainfall means precipitation of more than 204.5mm in 24 hours, while heavy rainfall ranges between 115.6mm to204.4mm rainfall, as per the IMD.

The bulletin issued at 3 am said IMD recorded 213mm rainfall at Santacruz, 197.5mm at Bandra and 174mm at Colaba in the city.

"@WesternRly Currently No local train services are running in both UP and DN direction till further notice due to waterlogging at multiple locations," divisional railway manager of Western Railway's Mumbai division tweeted.

Central Railway said that due to waterlogging in tracks at Dadar, Parel, Matunga, Kurla, Sion, Bhandup and other locations, train services on main line were suspended between CSMT and Thane.

Several long distance trains on both Central railway and Western Railway were affected due to the flooded tracks.