The police believe that a short circuit could have caused the fire even as fire officials are still investigating the cause of fire. 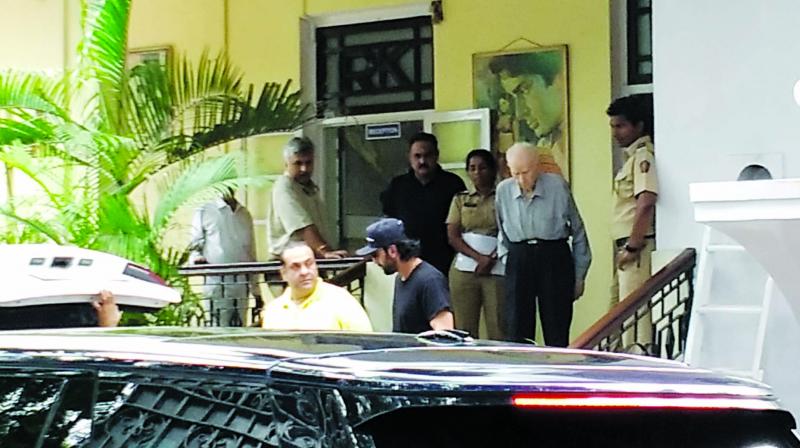 Rajiv and Ranbir Kapoor visit the site of the fire.

Mumbai: The fire at the legendary RK Studios on Saturday led to the irreplaceable loss of precious memorabilia and costumes, including musical instruments such as a piano and drums that the late Raj Kapoor had played. The police believe that a short circuit could have caused the fire even as fire officials are still investigating the cause of fire. A day after the incident, on Sunday noon, actor Ranbir Kapoor along with his uncle Rajiv visited the site.

“The fire that gutted RK studio in Chembur has no casualty and hence no FIR has been registered. But prima facie, it seems that the cause of fire is a possible short circuit in the premises,” said Shash-ikant Mane, senior PI, Govandi Police station. Fire officials said they might take two more days to confirm the fire’s cause. Fire chief P. S Rahangdale said, “We are still investigating the fire which broke out at RK studios on Saturday. We cannot confirm that it was caused by short circuit. It will take us two more days to come to a conclusion.”

Among the iconic things lost in the fire were old musical instruments used by Raj Kapoor as well as costumes of all RK Films. “The musical instruments, like the drums and the piano, were quite old but everything has been reduced to ashes and can hardly be recognised,” said a worker from the studio, who did not wish to be named.

Rishi Kapoor commented on the incident on Twitter, saying: “A studio can be built again but the loss of the irreplaceable memorabilia and costumes of all RK Films is tragic for all. Fire took it away.”

On Saturday, fire officials received a level 2 fire call after which six fire tenders and five water tankers were rushed to the spot. The fire was confined to a 100x400 sq ft area of the ground floor structure.