The younger lot, are not only having a smile on their faces but are also getting a hang of the consequences of various wrongdoings. 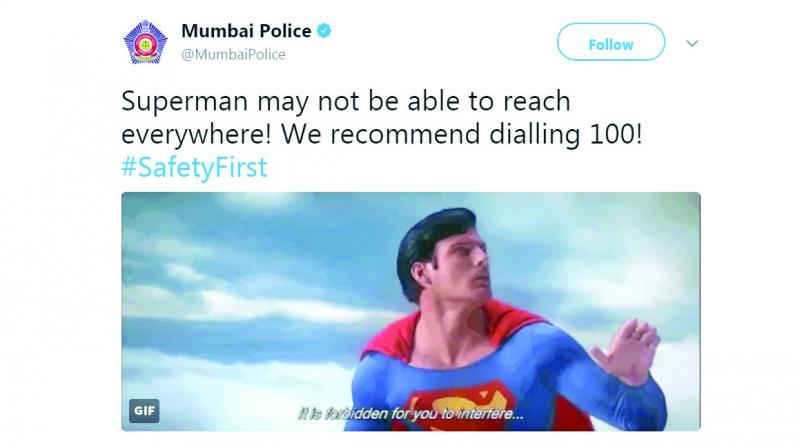 Mumbai: The Twitter team of Mumbai police has won many hearts yet again for uploading humorous memes, inspired by Superman movies and Netflix original Stranger Things. With youngsters and even older Twitter users showing appreciation for the team, the response to these tweets has been proceeding on a positive graph in the last couple of months.

The younger lot, are not only having a smile on their faces but are also getting a hang of the consequences of various wrongdoings. DCP (Cyber Crime) Akbar Pathan said, “As long as the memes are educative and funny, the kids are attracted to them. Our motto is to keep them safe and informed.”

From making pop culture references to cracking jokes as a means of sending across socially relevant messages to people, the Twitter team of the police department has proven to be witty.

The Mumbai police’s Twitter handle has helped many Mumbaikars to share their ordeal by assuring them that they will get definitely get the required help by replying to them immediately. This trend seems to have struck the right chord with the youth, so much so that they are even sharing these memes with their friends. The latest addition to these memes has been about making people aware of how they should not share their personal details with anyone.

In February this year, the Mumbai police had started making pop culture references in their tweets by sharing memes inspired by the popular sitcom FRIENDS. This had turned the wave of criticism for the police force into appreciation.

“The use of memes and GIFs is highly appreciated by the social media users and so we took the opportunity and joined the trend to reach out to the various sects of the society,” said Mr Pathan.