Shashikapoor was illegally sourcing the turtles from river Ganga at Unnao in Uttar Pradesh with the help of locals. 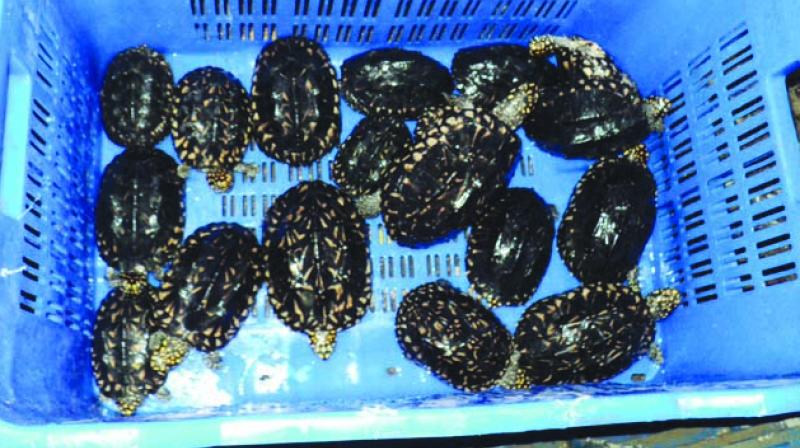 Mumbai: The Wildlife Crime Control Bureau (WCCB) has arrested the mastermind behind the smuggling of 161 specimens of spotted black terrapins, K. Shashikapoor, a Bangalore resident.

The turtles, which are protected under schedule I of the Wildlife Protection Act, 1972, were smuggled by the trafficking network and seized at the Mumbai airport on April 24 this year. Shashikapoor was illegally sourcing the turtles from river Ganga at Unnao in Uttar Pradesh with the help of locals. He was arrested on Sunday in Bangalore, produced before an Andheri court on Wednesday and sent to judicial custody on November 16.

On April 24, the air intelligence unit (AIU) of the airport’s customs had intercepted two passengers traveling to Malaysia along with 161 turtles after which the WCCB, Western Region, located in Navi Mumbai, took over the case for further investigation. The accused Thimmarayappa Jnanamurthy and Ramaswamy Shanmugam of Bangalore along with another two people, Shivakumar and Brabas, of Balegowdanahalle of Chikkaballapur district were arrested in April.

Another accused, Saravanan, from Chennai was arrested in his hometown. He revealed the involvement of Shashikapoor, claiming that he played main role in organising the illegal transportation of  turtles from Unnao to various parts of the country. It was then learnt that one Mohammed Ibrahim, an Unnao local, supplied the turtles and a group of people headed by Shashikapoor transported them to Kolkata and Chennai apart from Mumbai.