NCP to strive for alternative govt

After the meeting, NCP spokesperson Nawab Malik informed mediapersons of the party’s decision to provide a stable alternative government to the state. 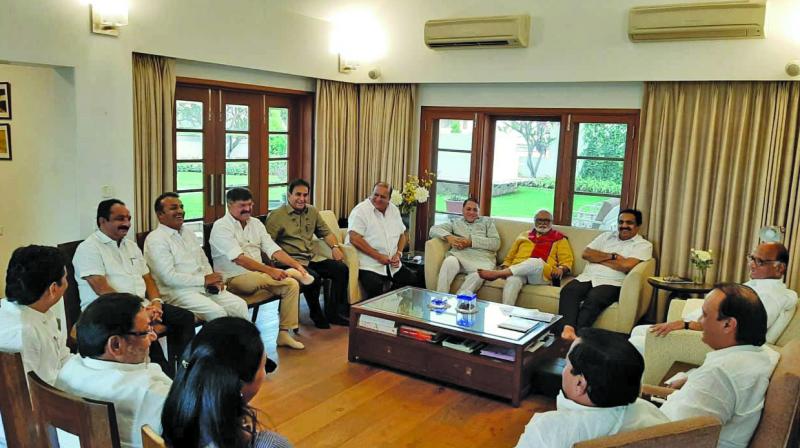 Mumbai: In what can be called as a huge relief for the Shiv Sena, the Nationalist Congress Party (NCP) on Sunday assured that it would strive hard to provide an alternate government in the state. In this regard, party chief Sharad Pawar will meet Congress president Sonia Gandhi in New Delhi on Monday.

The Sharad Pawar-led party held a meeting of its core committee in Pune. Though no formal decision was taken about government formation in the meeting, the party amply indicated that the efforts for an alternate government were on.

After the meeting, NCP spokesperson Nawab Malik informed mediapersons of the party’s decision to provide a stable alternative government to the state.

“We held a discussion on the current political situation in the state. It was decided that the present President's rule in the state should come to an end at the earliest. But, the NCP had fought the elections in alliance with the Congress. Hence it was decided that the decision about an alternate government will be taken after discussing the issue with the Congress,” said Mr Malik.

Mr Pawar and Ms Gandhi will hold talks in New Delhi on Sunday, following which NCP and Congress leaders will meet in Mumbai, he added.

The NCP is in talks with its ally Congress for a possible alliance with the Shiv Sena, after the Sena's alliance with the Bharatiya Janata Party (BJP) fell apart over the issue of rotational chief ministership.

Meanwhile, Congress leader Prithviraj Chavan said that his party was still trying to find if the Shiv Sena, Congress and NCP could come together.

“There will be a meeting tomorrow between Sena and Congress leaders. We will find out if we can go ahead or not,” the former chief minister said.

India’s third largest state has been under President's rule since November 12, after no party or alliance staked claim to form the state government.

The Sena is expecting support from the Congress-NCP combine after its alliance with the BJP collapsed due to differences over equal sharing of power.