Soon, members of the treasury benches too rushed towards them and tried to snatch banners, which resulted in pushing and shoving. 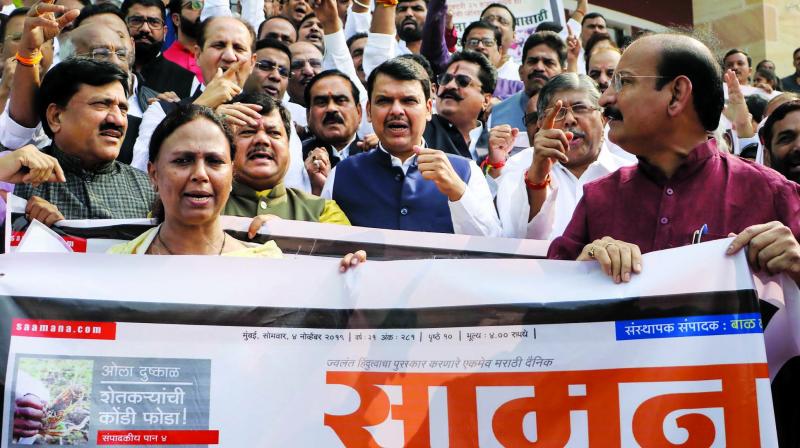 LoP Devendra Fadnavis and other BJP MLAs protest against the Shiv Sena on Tuesday. (Photo: PTI)

Nagpur: Tension prevailed in the Maharashtra Legislative Assembly on Tuesday as it witnessed an unprecedented scuffle between the ruling and Opposition members over brandishing of banners which prompted Speaker Nana Patole to adjourn the house for 30 minutes.

It all started when members of the Opposition benches displaying banners demanding immediate relief to farmers affected by untimely rains stormed into the well of the House.

Soon, members of the treasury benches too rushed towards them and tried to snatch banners, which resulted in pushing and shoving.

The situation went from bad to worse, prompting the speaker to adjourn the House for 30 minutes. The house transacted for about 26 minutes, while 40 minutes were wasted in adjournments on Tuesday.

Abhimanyu Pawar and Sanjay Raimulkar, both from the BJP, and Narayan Kuche of the Sena indulged in a scuffle as others members were in the well of the House. Nevertheless, senior MLAs like Bhaskar Jadhav of the Sena, Ashish Shelar and Girish Mahajan of the BJP intervened to stop the situation from going out of hand.

The speaker summoned the group leaders of the treasury and Opposition benches in his chamber for an amicable settlement. After another 10-minute adjournment, the House proceedings resumed but the speaker warned agitated members to show restrain and maintain the decorum of the House.

Leader of Opposition and former chief minister Devendra Fadnavis agreed with the speaker and asked his colleagues in the Opposition to display some restrain and behave according to the traditions of the august House. He promised to maintain the decorum of the House on behalf of the Opposition.

Meanwhile, finance minister Jayant Patil accused the BJP of doing nothing for farmers during the last three months of its tenure. Later, speaking to reporters, Mr Fadnavis said, “Before becoming the CM, Uddhav Thackeray had assured the farmers that he will ensure `25,000 per hectare to farmers. Now that he has become the CM himself, he should implement what he has promised.”