Further interrogations led the officials to an apartment at Palav Baug in Mahul village, where they found the narcotics. 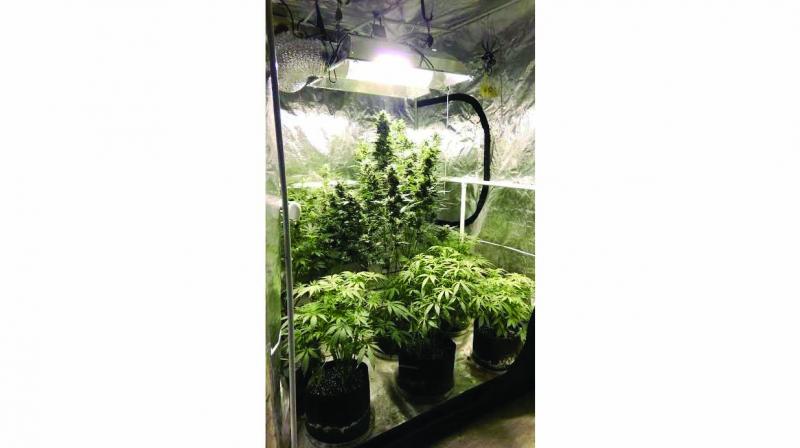 Cannabis pots at the accused’s home.

Mumbai: A team of Mumbai crime branch on Sunday unearthed a home-based cannabis production by ‘hydroponics’ in Chembur.

The accused were growing cannabis using the latest technology that they found on the Internet. Huge quantities of opium and equipment, including a pH soil tester and high-power LED lights, have also been seized, officials said.

Unit III of the crime branch had received information regarding home-based growing of cannabis and while patrolling the streets of Chembur, the officials spotted a suspect, who was loitering at the spot suspiciously with a backpack.

The team of officials headed by inspector Nitin Patil chased and apprehended the suspect, later identified as Nikhil Sharma (26), a resident of Chembur.

When the officials checked his bag, they found 1.54 kg cannabis, worth `2.90 lakh, crime branch officials said.

Further interrogations led the officials to an apartment at Palav Baug in Mahul village, where they found the narcotics.

‘Hydroponics’ is a method of growing plants in a water-based, nutrient-rich solution.

‘Hydroponics’ does not use soil, instead the root system is supported using an inert medium such as perlite, rockwool, clay pellets, peat moss, or vermiculite.

“The accused were growing the plant for self-consumption for over a year and had started peddling cannabis to people for several months. We are on the lookout of the second accused, who is currently absconding. His family is in a state of shock after learning of these activities,” said a crime branch officer.

A case has been filed under sections of the Narcotic Drugs and Psychotropic Substances (NDPS) Act against Sharma and others and further probe is underway.