The cadres of the Raj Thackeray-led party smashed and pulled down over 20 signboards on the Mumbai-Ahmedabad highway in Vasai area. 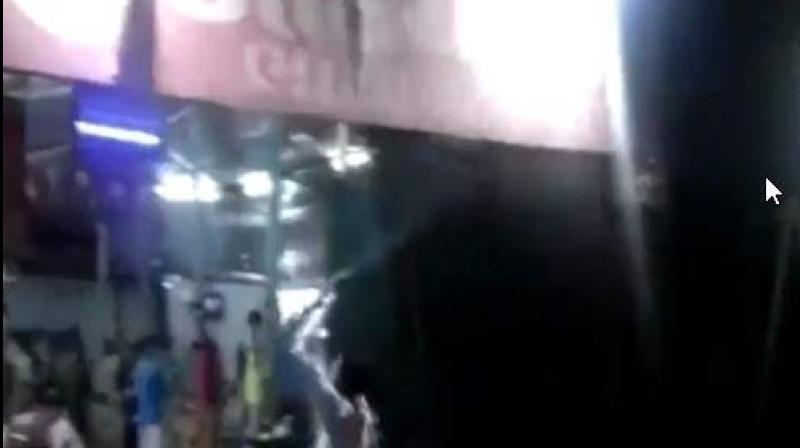 The Vasai police control room confirmed the incident, but said no offence had been registered so far. (Photo: ANI | Twitter)

Thane: Activists of the Maharashtra Navnirman Sena (MNS) have pulled down Gujarati signboards at some commercial establishments in the district.

The cadres of the Raj Thackeray-led party smashed and pulled down over 20 signboards on the Mumbai-Ahmedabad highway in the district's Vasai area late Sunday night, MNS Thane region president Avinash Jadhav said on Monday.

"Vasai and Thane district are in Maharashtra and not Gujarat, and we will not tolerate name boards in Gujarati anymore," Jadhav told PTI on the phone.

He asserted that their agitation against such signboards would continue.

The Vasai police control room confirmed the incident, but said no offence had been registered so far.

The incident came two days after Raj Thackeray called for opposition unity and a "Modi-mukt Bharat" by 2019.

Addressing party workers at a rally at Shivaji Park in central Mumbai on Saturday, Thackeray said, "The country is fed up with the false promises made by (Prime Minister) Narendra Modi and his government."

"All opposition parties should come together to get rid of the BJP-led NDA government to ensure a "Modi-mukt Bharat," he said, while reminding the audience of the BJP's "Congress-mukt Bharat" slogan.

In July 2017, some workers of the MNS had protested against a jewellery shop in Dadar and a hotel in the Mahim area of Mumbai, asking them to remove the signboards in Gujarati, the police had then said.

Following the protests, the two establishments removed the Gujarati signboards, they said.

While the owners of the establishment did not lodge any complaint against the MNS cadres, seven of them were then arrested for "illegal gathering" in Mahim, the police had said.