The missing sailor has been identified as 53-year-old Abdul Azeez Kolkata. 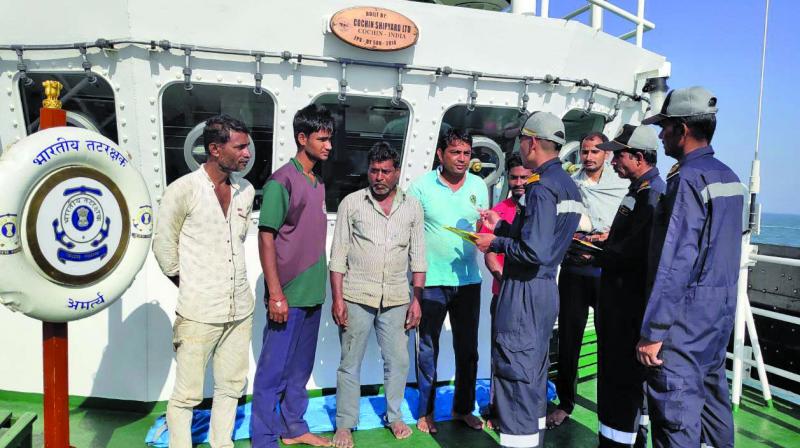 The Coast Guard immediately rushed Amartya by diverting it to undertake the search and rescue mission.

Mumbai: The Coast Guard launched a rescue operation off Mumbai coast after a fishing vessel sent an SOS communication to their control room on Monday morning.

The distress call was made after the tugboat began sinking with 7 persons on board, while it was headed to Tarapur from Mumbai. While six people were rescued, search continued to find the seventh sailor.

The officials said that the call was received from a tugboat ‘Revati’ at around 10.45 am. The call stated that the vessel was bound for Tarapur from Mumbai and had seven crew members onboard.

The sailors sought help as the tugboat was sinking. The Coast Guard immediately rushed Amartya, its fast patrol vessel on surveillance mission, by diverting it to undertake search and rescue mission.

“The Coast Guard ship responded to the distress call and reached the location of tugboat at 10.54 am. The operation began soon and we rescued six crew members from the sinking vessel. The recovered crew was provided with necessary first-aid and they were stabilised. One of the crew member is still missing,” said a Coast Guard release.

Those rescued were identified as Rashid Qasim Suratiya (38), Tonoy Chalak (22)from West Bengal, Ramesh Keni (55) from Borivali, Dilip Yadav (29) from Malad who has sustained injuries in the incident, Shanu Kumar (19) from Patna in Bihar and Salim Siddique.

The missing sailor has been identified as 53-year-old Abdul Azeez Kolkata.

The search and rescue operation continued further to look for the missing person. In addition to the surface search by two ships, two helicopter sorties by Chetak helicopter were also pressed into service to undertake sea-air coordinated search.