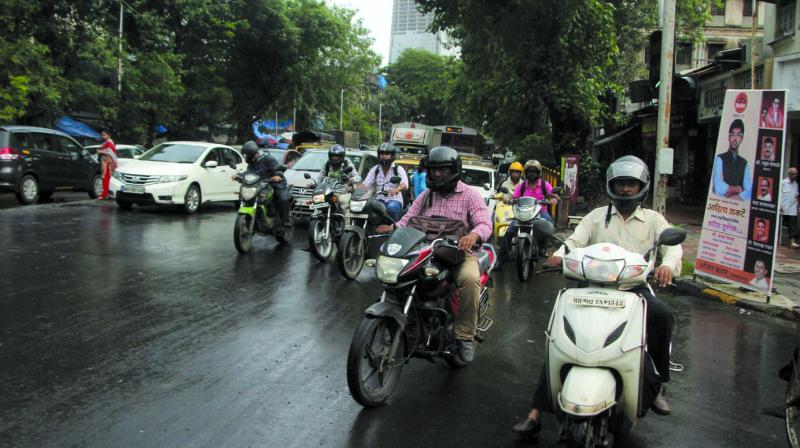 The percentage of motorists who use helmets rose from 63 in 2015 to 92 this year. (Photo: Mrugesh Bandiwadekar)

A senior traffic police official said that the use of helmets has also decreased the number of road-accident fatalities in the city. The fear of being served with an e-challan on being caught on the traffic cameras without a helmet might be one of the reasons of the increased use of it.

An official said that, among the 490 fatalities reported in the year 2017, 38 per cent comprised of motorists including 14 per cent pillion riders, while the 52 per cent comprised of pedestrians, died in road accidents. “The fear of being caught has compelled the motorists to wear helmets. Increased surprise checks, issuance of e-challans and social media campaigns have encouraged motorcyclists as well as the pillion riders to wear helmets. It have been proven that, the wrong method of wearing helmets contributes to fatal road crashes and injuries,” he added

“I always use a helmet no matter how far I need to go. I am a law abiding citizen, and always try to go by the book”, said Jasper Thomas, a resident of Malad.

Sumeet Kamble, a resident of Dahisar said, “I generally use helmet, but while travelling short distances in the vicinity, I sometimes avoid wearing it and this led me to pay a fine of `200 one day. Since then, I always wear a helmet.”