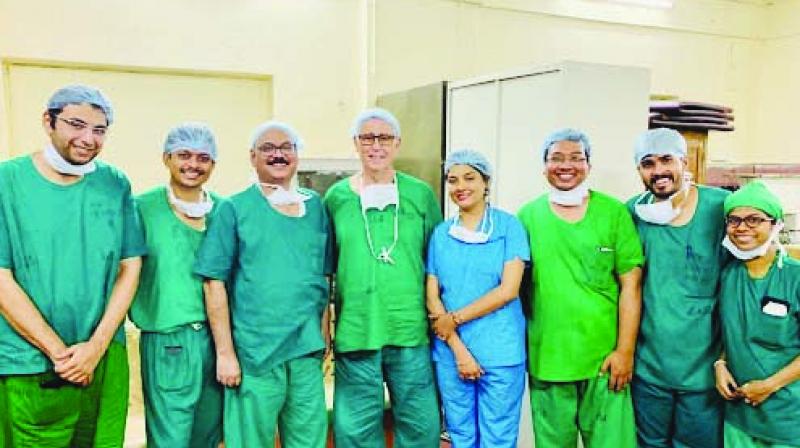 The team that operated on the patient.

Mumbai: A 27-year-old farmer from Yavatmal district, who had accidentally exposed himself to a chemical that damaged his larynx, has regained his voice after three years following an operation known as ‘laryngotracheal reconstruction’ at the state-run JJ Hospital. The procedure was carried out by Dr Philippe Monnier from Switzerland along with the staff of the hospital’s ENT department.

The patient, Rahul Mangal Pawar (27) underwent a tracheostomy, a medical procedure that involves creating an opening in the neck in order to place a tube into a person’s windpipe, after coming in contact with an organophosphorus compound, which is used to improve farm yields.

Speaking about Mr Pawar’s ordeal, Dr Shrinivas Chavan, head of JJ Hospital’s ENT department, said, “In Yavatmal, a tube was inserted through a cut in the neck below his vocal cords, allowing air to enter the lungs. However, he was struggling to speak since the OPC had damaged his larynx. The laryngotracheal reconstruction was performed recently. He is recuperating and he’ll be discharged within a week.”

Shedding light on the procedure, which provides a safe and stable airway, he said, “We took a few segments from the upper and lower trachea and joined them so we could preserve his voice box and, thus, he regained his voice.”

Mr Pawar’s wife Sonu expressed gratitude towards the doctors for restoring her husband’s voice. “The treatment here was free and now we’ll go back with happiness,” she beamed.