Police nab 3 for killing man who saw them steal

The police are now on lookout for Badkau Paswan, who assisted the killers while they were on the run. 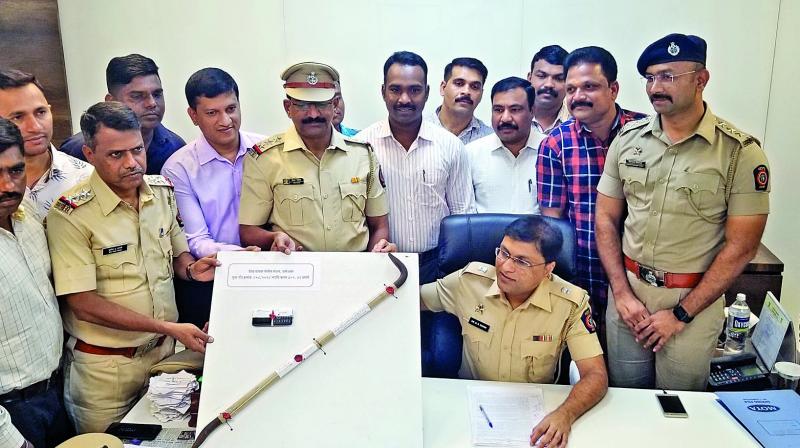 Police with the murder weapon.

Mumbai: The Shil Daighar police station arrested three people from Uttar Pradesh for murdering a 26-year-old man, who witnessed a theft committed by them. The four worked at a scrap yard in Mumbra, where the trio committed the theft.

The deceased had confronted them and threatened to complain to their employer, following which they hatched the murder plot. The deceased, Angrez Naseebdar, alias, Jameel, was hit with an iron rod on his head on April 10, while he was asleep.

The arrested accused have been identified as Nandram Verma (23), Pramod Verma (23) and Jagnarayan Verma, alias, Jungli (29), who had fled to their hometown in the Balrampur district of Uttar Pradesh, after committing the murder.

Naseebdar had spotted the accused trio stealing scrap pieces from the scrap yard in Dawle village in Daighar area, where they are employed.

Naseebdar approached the trio and told them that he would complain to the scrap yard owner Aadil Khan (32) about the attempted theft. Scared of loosing their jobs, the accused hatched a plan to kill him.

“In the night, the trio held gagged Naseebdar and caught his hand and legs and struck him on the head with an iron rod. He died soon after,” said D. Swami, deputy commissioner of police, Zone I.

The police are now on lookout for Badkau Paswan, who assisted the killers while they were on the run.

All the accused have been booked under sections 302 (murder) and 34 (acts of common intention) of the Indian Penal Code and further probe is underway.