More central forces to be deployed in left-wing extremism-affected areas. 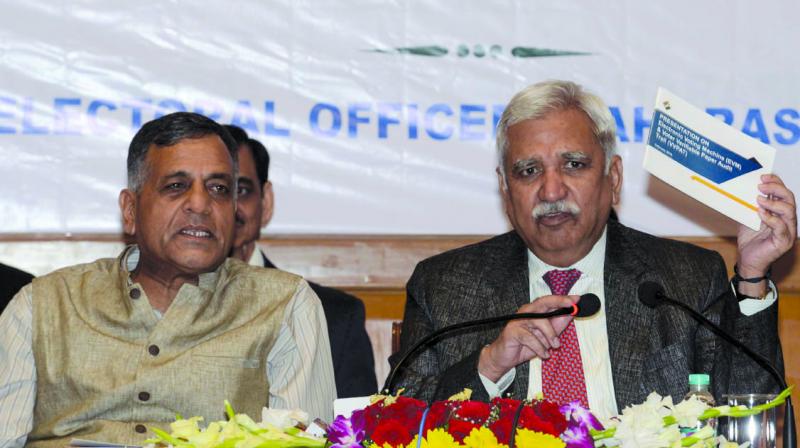 Mumbai: The Election Commission of India (ECI) on Wednesday turned down the demand of Opposition parties, which sought the use of ballot papers instead of electronic voting machines (EVMs) in the forthcoming Vidhan Sabha polls.

Following the defeat in the Lok Sabha polls, the Opposition parties had protested against the use of EVMs and demanded the reintroduction of paper ballot system for the Assembly polls., The ECI, however, ruled out the use of ballot papers contending that EVMs cannot be tampered with.

“We politely informed the political parties that the ballot papers are now history and it will not be possible to use it, Mr Arora said, adding that the Supreme Court has also upheld the use of EVMs for the polls.

“This is a very serious issue. The EVMs can malfunction like any other machine but since it is a standalone machine, which can operate independently, it just cannot be tampered with,” he added.

Some of the parties had demanded the expenditure limit for the candidates should be increased for assembly polls. Mr Arora, however, clarified that the ceiling would remain unchanged.

For the Lok Sabha polls, the expenditure limit is `70 lakh, while for Vidhan Sabha polls it is `28 lakh.

Talking about the deployment of forces, the CEC said more central armed forces would be deployed in left-wing extremism-affected areas, as the movement of central forces from one place to another is a significant factor in deciding polling dates.

All the parties talked about Diwali next month and cited different dates (for holding elections), he said.

“But in any case, while deciding the dates, the commission does try to take care of various factors like holidays and schools, examinations of kids, very important festivals of different religions,” he said.

The election dates and number of phases it will be conducted in will be duly informed at a press briefing in Delhi, he said.

Mr Arora said Maharashtra’s chief secretary asked him if the state administration can continue doing relief work in some Western Maharashtra districts like Sangli and Kolhapur.

“We told them there are provisions on this in the MCC (model code of conduct) and if they (the state administration) will make a need-based case, the Commission will consider sympathetically,” he said.