On the other hand, BJP legislator Narendra Mehta said that he did not wish to ally himself with a party that does not know how to respect women. 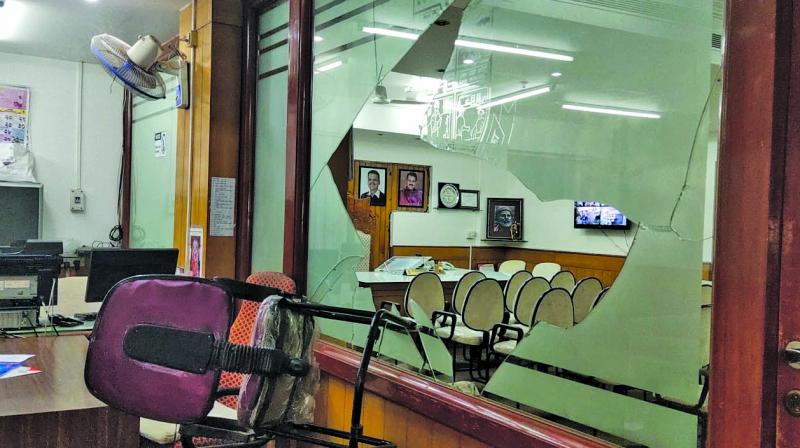 Office of BJP mayor in administrative building of MBMC.

Mumbai: The Bhayandar police has booked 28 Shiv Sainiks, including 18 Sena corporators, for vandalising the standing committee hall and office of BJP mayor Dimple Mehta in the administrative building of the Mira Bhayandar Municipal Corporation (MBMC) over a delay in the construction of an art gallery in memory of Balasaheb Thackeray on Tuesday.  However, no arrests have been made so far.

Apart from Sections 353, 143, 147, 149, 427 and 504 of the Indian Penal Code, all the accused have been booked under the Maharashtra Police Act and for causing damage to public property, which attracts imprisonment for at least six months while the maximum term is five years. The FIR followed in response to a complaint filed by MBMC secretary Vasudev Shirwalkar. “The statements of eyewitnesses have been recorded and efforts were on to nab the accused,” said senior police inspector Chandrakant Jadhav.

Strongly objecting to the imposition of Section 353  (assault or criminal force to deter public servant from discharge of his duty) and the implication of “innocent corporators”, Sena legislator Pratap Sarnaik has demanded Mr Shirwalkar’s suspension for his “biased approach”.

On the other hand, BJP legislator Narendra Mehta said that he did not wish to ally himself with a party that does not know how to respect women. The ruckus broke out during the standing committee meeting when chairperson Adv. Ravi Vyas kept on hold the resolution to give a nod to invite bids for the construction work of proposed memorial to the Shiv Sena founder in Bhayandar.

After manhandling BJP members and throwing chairs in the well of the hall, irate Sena members, thronged the mayor’s office where the unruly mob damaged furniture, flung documents and even shattered glass panes, before marching into the civic chief’s cabin.