They named a number of issues where the government allegedly has cheated different sections of the society. 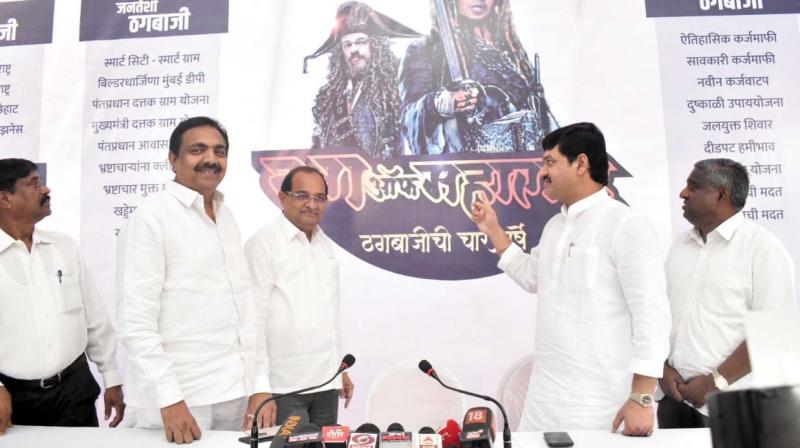 Opposition leaders with the poster.

Mumbai: The Opposition upped the ante ahead of the Winter Session of the Mahara-shtra legislature, which starts from Monday. The Opposition called ruling alliance led by chief minister Devendra Fadnavis and Shiv Sena chief Uddhav Thackeray ‘thugs of Maharashtra’.

They named a number of issues where the government allegedly has cheated different sections of the society.

It is now clear that the Opposition in the state will unitedly try to corner the government on drou-ght, reservation demands of different communities, the alleged deteriorating law and order situation as well as the killing of tigress Avni.

“This government has cheated people on various issues such as reservation, jobs, minimum support price, statues, memorials and other promises. Thugs are known for cheating and so is this government. That’s why we will expose these “thugs of Maharashtra’ in the coming session,” said the Opposition leader in Assembly Radhakrishna Vikhe-Patil in the press conference. He also said that the lack of preparation to fight drought, ‘false campaign’ over Maratha reservation and killing of Avni would be major issues for the Opposition.

Opposition leader in Council Dhananjay Munde spoke about his tour to drought-affected districts in Marathwada. “The government machi-nery is absolutely nowhe-re on the ground and the people have been left on their own. Already there has been huge migration from Marathwada to cit-ies, but the state government is busy with advertising. We will see that the farmers and labourers of Maharashtra get justice in this session,” said Mr Munde.

Before the press conference, leaders of all Oppos-ition parties met and decided to demand immediate compensation for drought-affected farmers. “We will demand Rs 1 lakh per hectare for horticulture and Rs 50,000 for other crops. We will see that the government makes an announcement for the same. Otherwise, we won’t allow the House to work,” said Peasants and Workers Party of India leader Jayant Patil.