According to sources, seeking of mandatory transfer certificate (TC) delayed the process of shifting the turtle to a rescue centre. 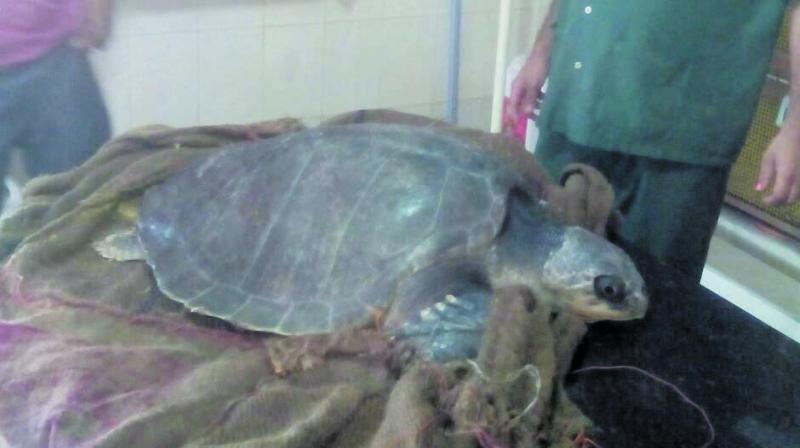 Mumbai: An olive ridley sea turtle that was rescued by the Kalyan forest department on Thursday was brought to Thane Society Prevention of Cruelty to Animals (TSPCA) on Saturday instead of being rushed to the forest department’s turtle rescue centre in Dahanu, only because the rescue team that included forest officials did not get a transfer certificate from the Thane forest department. This endangered species of turtle, which is said to be injured, will now have to be transported to the rescue centre in Dahanu, exclusively designed for turtles, for its treatment. Experts have questioned the lack of coordination and handling of emergency situations by the forest department, risking the life of the schedule I turtle.

According to sources, seeking of mandatory transfer certificate (TC) delayed the process of shifting the turtle to a rescue centre. The treating veterinarian from TSPCA said, “One of the front flippers has injury and damages, no other notable external injuries are visible. However, a detailed medical examination is yet to be done.”

Pawan Sharma, founder of Resqink Association of Wildlife Welfare, said, “We do not know where and how  the endangered turtle was kept for two days. When endangered specie is rescued, the process should be quick enough to shift him to a rescue centre as soon as possible. A turtle cannot be treated as secondary only because it is not aggressive.”

“He has abrasions on his forelimb possibly from some chemical he came in touch with while he was stuck at the creek. In the absence of a medical and transit centre here, we have had to initially keep him in a Syntex tank for a few hours. After treatment and shifting our other reptiles from our pool into a smaller pool, we had to fill the pool with seawater that we had to carry in our ambulance from the Kolshet creek, and then shifted him into the pool.

He is better now inside the pool alone. But we need to shift him to the Marine Centre at Dahanu as soon as possible. And of course we hope that the Forest Ministry will give a quick decision about a medical and transit centre at the earliest,” said Mr Majumdar.

Deputy chief conservator of forest, Kishore Thackray, Thane Forest Department (TFD) said, “The Kalyan officials probably didn’t know that Dahanu had an exclusive rescue centre for turtles. However, though TSPCA has space issues it too is equally good.”