Eight water tankers and eight fire engines rushed to the spot and the fire was brought under control at 9 am. 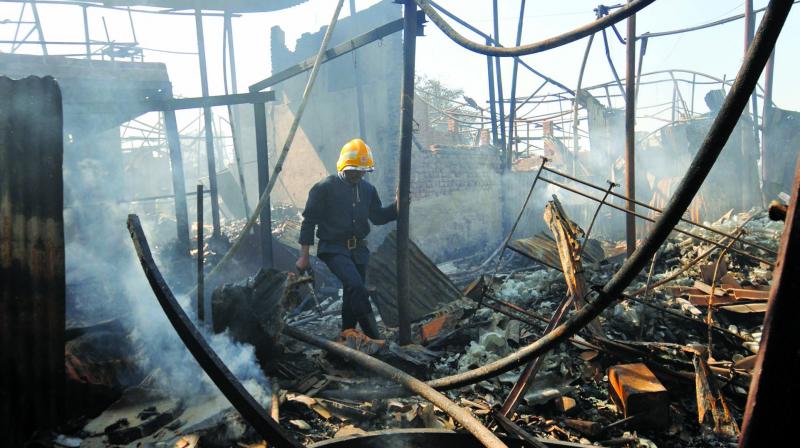 A fireman inspects the remains of a site at Prem Nagar, Dharavi where 100-odd shanties were destroyed in a devastating fire due to a short circuit. (Photo: Debasish Dey)

Mumbai: A fire broke out in a slum at Prem Nagar in Dharavi early on Sunday, destroying 100-odd shanties that served as garbage-recycling units at around 4 am. There were no casualties as around 40 workers, who were at the units, detected the fire early and had left the place to save themselves even as they alerted the fire brigade and the police.

According to the police, the fire was caused by a short-circuit in a meter box installed near the site. Eight water tankers and eight fire engines rushed to the spot and the fire was brought under control at 9 am. The fire spread quickly and within minutes hundreds of shanties was on blaze. The fire was reported to the fire brigade at around 4.15 am on Sunday.

“We were lucky enough to alert everyone and call the fire brigade in time,” said a woman whose house was burned down. She added, “My grandchildren were sleeping with me when the fire started, but due to heat and yelling, I woke up and escaped with them.”

Prem Nagar locals usually wake up early to head to their work places and hence no casualty was reported.