Commuters near the long-distance end of the station ran out towards the taxi stand, thinking it was a bomb blast. 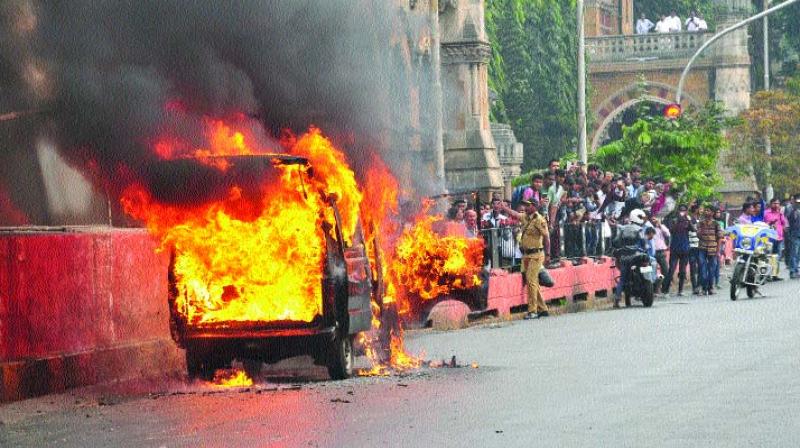 A taxi bursts into flames outside the CST subway gate at around 3.50 pm. (Photo: Debasish Dey)

Mumbai: A chaos and a stampede-like situation occurred at Chhatrapati Shivaji Maharaj Terminus (CSMT) when a taxi burst into flames outside the CST subway gate at around 3.50 pm. Thick black smoke entered the subway and people ran towards the stairs leading to the CSMT station near platform number one.

Commuters near the long-distance end of the station ran out towards the taxi stand, thinking it was a bomb blast. The Maharashtra Security Force (MSF) which were recruited due to the stampede at Elphinstone Road on September 29 killing 23 commuters died in the stampede sprang into action and 50 ticket collectors, along with the RPF and GRP staff began to get the commuters into a safe space. However, there were no injuries in the incident. The blast occurred at around 3.50 pm and passengers began to run out of the entrance right outside the platforms that see long distance trains. A woman wearing a burqa ran out with her two children the station after she screamed. She told The Asian Age, "I don't know but I heard a loud blast and people began to run past us and we did the same."

The taxi drivers asked the running crowd to stop as they might cause a stampede. Inside the CST station, the rush was diverted to the exit right next to the ticket counters causing complete choking of the entry and exit point from South Mumbai.

The taxi was driven by Mahendra Singh. Singh, who was running away from the taxi, said, "I heard a loud pop and realised something was amiss. The passenger behind Me got out of the taxi and ran away and I was trying to remove the documents from the taxi when the fire then entered the dashboard and I barely made it out. The documents got burned." Two fire engines were sent to the spot by the BMC and the fire was extinguished in half an hour.