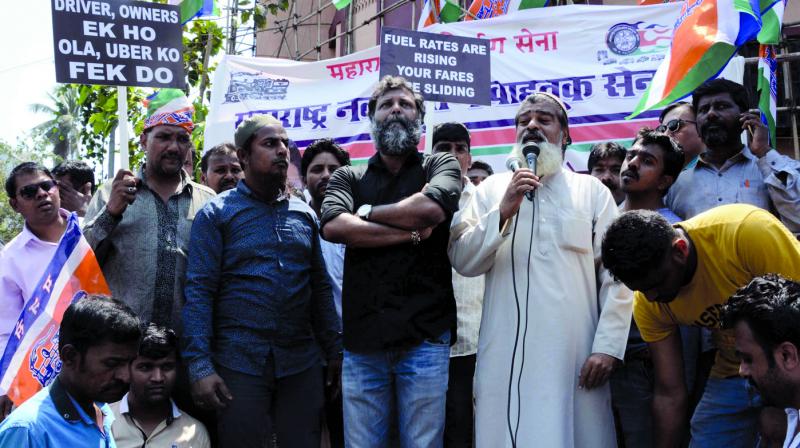 Mumbai: The strike of Ola and Uber drivers, who are protesting against low payment by the app-based taxi aggregators, affected the commute of Mumbaikars on Monday. While many who usually book rides with these cabs firms gave the apps a skip after hearing about the strike, several commuters said they had to allegedly shell out more — that too after a long wait for the cab.

The strike, which began Sunday midnight, will be continued till Tuesday noon, according to leaders of the Maharashtra Navnirman Sena (MNS), which is supporting the strike.

As private cabs were off roads, commuters had to agree to the price demanded by auto-rickshaw and taxi drivers. “I pay around Rs 100 every day to reach Lower Parel from Wadala, but today due to the strike, I had to pay around Rs 180 to reach the same location.  Price surging was witnessed heavily today,” said Harpreet Kaur, a working professional.

Similarly, a south Mumbai resident who requested anonymity, said she paid Rs 700 for a commute from Mumbai airport to Breach Candy, which was way higher than the usual amount.

Tejal Pednekar, a content writer who resides in Vile Parle, said, “I usually prefer an Uber share vehicle to reach my office which is at Andheri, but today I had to rely on auto-rickshaws.” On Monday, several Mumbaikars took to Twitter to vent about their experience. A total of four cab aggregator unions had participated in the strike.

Meanwhile, a MNS leader broke the windshield of a taxi that was plying in the city. In a video circulating in social media, the leader is seen hitting the windshield using an iron rod and questioning the cab driver on why the vehicle was plying during the strike.

Commenting on the ongoing strike, an Uber spokesperson said, “We regret the disruption caused to our rider and driver community by a small group of individuals. The Bombay high court issued an injunction prohibiting unions, their leaders and anybody else from obstructing the activities of Uber driver partners. We have been listening to our driver partners  and are committed to ensuring that Uber remains an attractive  opportunity for them.”

Maharashtra Navnirman Sena’s (MNS) transport cell has decided to continue the app-based cabs’ strike till noon on Tuesday. It has been decided that Ola company’s representative will give the names of their senior officers for negotiations with drivers on Tuesday.

The decision about the strike will be taken after that. Meanwhile, MNS’s transport cell claims huge success to its agitation, as large number of taxis were offline on Monday in Mumbai.

For the various demands of drivers, MNS’s transport cell has given call of indefinite strike of Ola and Uber private taxis. There are almost 80 thousand taxi drivers connected to these companies in Mumbai. According to Sanjay Naik, president of MNS transport cell, those all drivers have supported the strike and taxis were off road for the entire day.

“We had meeting with Ola representatives at Andheri police station. And it has been decided that Ola will give the names of senior officers to whom we can discuss and negotiate on the issue. These names will be given by 12 pm on Tuesday. Till then our strike will continue,” said Mr Naik at the evening.

“We will wait for the two days as police has taken responsibility to conduct the meeting. It will take place either in Uber’s office of in police station. But the decision about strike will be taken only after 12 pm on Tuesday,” said Mr Naik.

Not just MNS’s transport cell but Mumbai taximen union and other smaller unions are also participating in the strike.