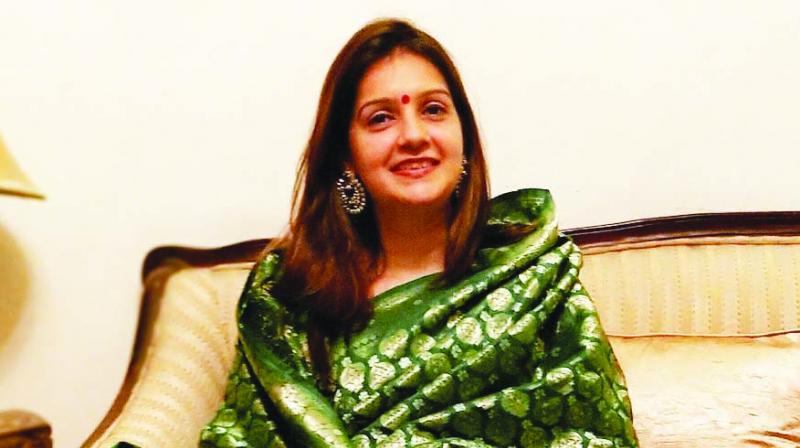 Mumbai: Priyanka Chaturvedi, who resigned from the Congress and joined the Shiv Sena on Friday, said she was hurt after her former party reinstated few workers, who had made comments against her.

Explaining why she chose Shiv Sena, Ms Chaturvedi said that Mumbai is her “karmabhoomi” and she always felt connected with the Sena.

She said that she would accept any responsibility given to her by the Shiv Sena and was ready to work for the party in any part of the country.

Without naming the Congress, she also said that she gave 10 years to the party thinking that she could speak for the cause of women, despite being trolled on social media.

Ms Chaturvedi joining the Shiv Sena came as a jolt to Congress as she was, until very recently, seen making the stand of the party known before the media.

Speaking with reporters in the presence of Shiv Sena chief Uddhav Thackeray, Ms Chaturvedi said that she had joined after thorough consideration.

“I was very let down. I thought if I didn’t fight for my self-respect, I would fail as a woman. I have joined the Shiv Sena after a lot of thinking and understanding my responsibility towards the cause of women,” she added. She would raise the issues of the country through the Shiv Sena.

She said that she had already given her resignation to the Congress party president Rahul Gandhi on Thursday.

The 39-year-old leader said, “I kept speaking in a ‘bindas’ way despite being abused and trolled constantly. I still used to fight because if I didn’t, I could not have made capable women who want to enter politics. I was pained when some party workers made comments on me. After being suspended, they were reinstated.”

She said she would work towards strengthening the party in Maharashtra as well as across the country.

When asked whether she resigned from the Congress as she had been denied a ticket, Ms Chatu-rvedi said she was hopeful of a ticket, for an opportunity to politically represent those who had faith in her.

Ms Chaturvedi denied that she resigned from the Congress after being denied a ticket in the ongoing Lok Sabha polls. Asked why did she join the Sena and not the BJP, Ms Chaturvedi said that as she hailed from Mumbai, her “karmabhoomi”, she always felt connected to the Sena.

“If I have joined the party, it is only with a feeling to serve and not for political posts. I wanted to come back to my roots. When I thought of coming back, I did not find any organisation better than this and no other better platform than this,” she said.