The location of this tank is not being disclosed by the forest department. 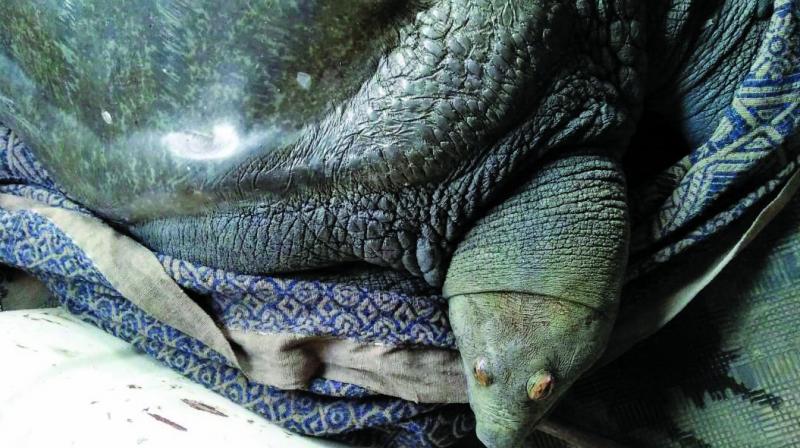 The turtle, weighing 60 kg, was found in good health.

Mumbai: A turtle belonging to an endangered species, Nillsonia Leithi, was rescued from a private pond on May 15 by the forest department and taken to Thane Society for Prevention of Cruelty to Animals (TSPCA).

However, the turtle, weighing 60 kg, was found in good health and placed in a Thane-based tank instead of a dedicated shelter or fresh water body which is the natural habitat of this kind of turtle. The location of this tank is not being disclosed by the forest department. The pond from where the turtle was rescued based on a tip-off from the locals, belongs to a private firm. Allegedly, the owner of the turtle has not yet been questioned by the forest department.

According to the department, they received a call from a few volunteers informing about the large turtle. The locals near Kalwa had called the volunteers. The department rushed the turtle to TSPCA where it was declared fit and healthy. Later, it was transferred to a tank in Thane. According to I.S. Kambli, range forest officer of Thane city, Thane forest department, the turtle has been kept in a tank where the Thane Municipal Corporation (TMC) does not allow fishing.

Mr Kambli said, “The turtle’s exact location is not being disclosed to anyone for the sake of its safety.”

Asked if an enquiry was conducted into existence of the particular species around Kalwa, he said, “I have not been able to personally look into the matter due to a few sub-judice cases.”

However, Shakuntala Majumdar, president of TSPCA, said, “It belongs to a rare species and requires the utmost care. There is a need to find out about its origins and how it can be released there.”

Gowri Mallapur, an expert studying this species of turtle in supa dams, said, “I had asked for a GPS location of the turtle in order to understand the place from where the turtle could have come but that hasn’t been done. If it has been found near Kalwa creek, this will be the first ever time such a turtle has been found from the vicinity. It is a large animal and lives in fresh water systems.”