The mortal remains of Mr Ismail will be sent to Uttar Pradesh via train for the final rites. 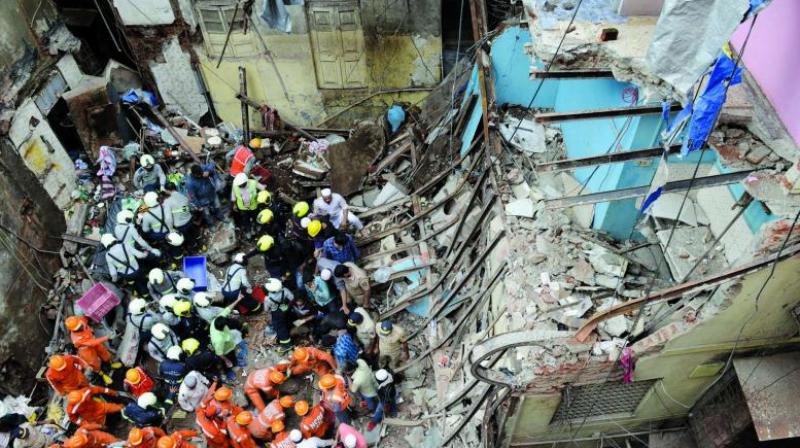 Rescue team at the spot where the four-storey building collapsed in Dongri on Tuesday. (Photo: Rajesh Jadhav)

Mumbai: One of the 13 dead bodies brought to state-run J.J. Hospital following the Kesarbai building collapse was on Friday claimed by an acquaintance of the deceased.

The body, now identified to be that of Javed Ismail (34), was lying unclaimed in the morgue for over three days.

The Dongri police, managed to find the claimant to Mr Ismail’s body after carrying out a thorough investigation.

Mumbai police spokesperson DCP Pranay Ashok told The Asian Age, “The police officers searched Mr Ismail’s schedule and got the link from there. While taking notes about Mr Ismail’s whereabouts, they came to know that his distant cousin sister Shabnam Ismail Shaikh (53) was also residing in Dongri”.

When the police approached her, she couldn’t believe that Mr Ismail was dead. The police had to convince her to visit J.J. Hospital for identifying and claiming his dead body. It is only then that she came forward to take charge of Mr Ismail’s body.”

Mr Ismail was working as an assistant tailor in a tailor’s shop in Kesarbai building. The deceased hailed from Uttar Pradesh and did not have any of his relatives in the city.

The mortal remains of Mr Ismail will be sent to Uttar Pradesh via train for the final rites.

Ms Shabnam said that it was difficult to come to terms with his death. She said that he had recently been to their house for a feast. Thirteen people died when the building collapsed on Tuesday.