Mumbai swept away in Coldplay’s tunes

An all-star line-up was in action driving the crowds crazy with the mind-blowing performances. 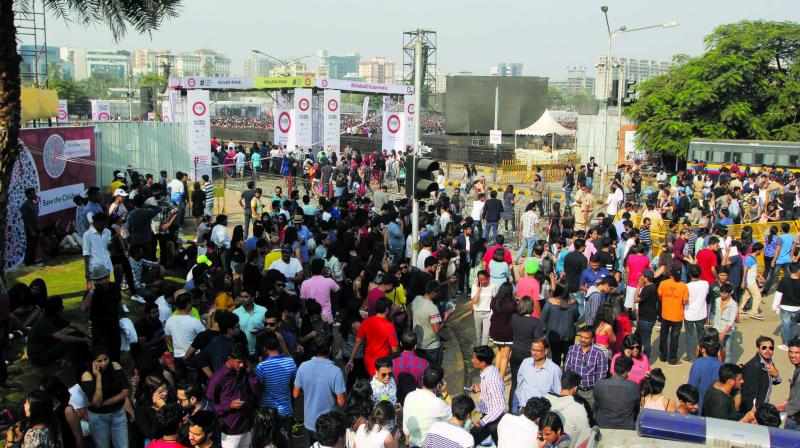 Fans outside the venue. Over 80,000 people attended the concert. (Photo: Asian Age)

Mumbai: All roads led to the posh Bandra-Kurla Complex (BKC) on Saturday for the much-awaited Coldplay concert. Heads turned and conversations stopped mid-sentence when the world's biggest band started to perform around 9.20 pm —frontman Chris Martin doled out memorable tracks like Fix you, Paradise, A sky full of stars, The scientist, A head full of dreams, Clocks, Parachutes and Viva la vida among others. The event saw more than 80,000 people from across the country.

The concert is significant as it takes place just before the eighth anniversary of the 26/11 Mumbai terror attacks and speaks volumes about the spirit of Mumbai — the show must go on.

Prime Minister Narendra Modi was supposed to attend the festival, but could not make it. The PM, however, joined the revellers via a video link that was beamed live. Addressing the Global Citizen Festival in Mumbai, the PM said the public has fully backed the “second cleanliness drive”.

The PM has been under attack after his move to withdraw Rs 1,000 and Rs 500 notes on November 8 caused massive inconvenience to people.  But he looked in a light mood.

“You have been smart in asking me to address the gathering and not sing, or else I am sure you would be asking your money back that too in Rs 100 notes,” he said via video-conferencing.

He quoted lines from Nobel Laureate Bob Dylan’s iconic “The times they are a-changin”, a song which had become emblematic of change. Fans and revellers made a beeline for the country’s biggest rock concert at the MMRDA Grounds, BKC from 9 am. Not to forget, the on-duty policemen, who tried their level best to manage the swelling crowds. By 11.30 am, the 2-km long serpentine queue wound its way from G-block to the Trade Centre building, even as drones hovered over their heads and celebrities zipped across in their luxury cars.

An all-star line-up was in action driving the crowds crazy with the mind-blowing performances. The concert saw the likes of Sachin Tendulkar, Amitabh Bachchan, Shah Rukh Khan, Alia Bhatt, Farhan Akhtar, Katrina Kaif, A.R. Rahman, Parineeti Chopra and Arijit Singh in performance. Music composer trio Shankar Ehsaan Loy belted out hit numbers like Jhoom barabar jhoom and Kal Ho Naa Ho. Musical genius Rahman sang Tu Hi Re, Dil Se and the Tamil version of Humma Humma, but it was rapper Jay Z, who set the temperatures soaring high. After the concert concluded, there was buzz on twitter about Martin rolling the tricolour on the stage floor but our correspondents present at the event did not see any such thing.