The crisis at the bank is attributed to the loans allocated to realty firm the Housing Development Infrastructure Ltd (HDIL) without scrutiny. 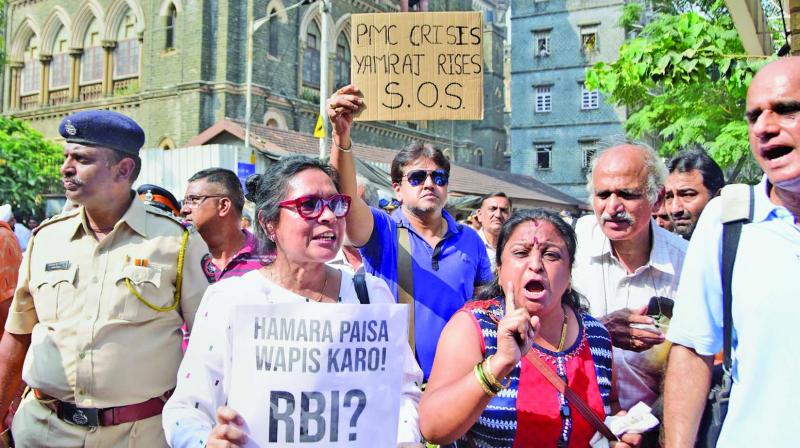 Mumbai: The Reserve Bank of India (RBI) on Tuesday filed a detailed affidavit in the Bombay high court explaining the steps it intends to take to protect depositors of Punjab and Maharashtra Co-operative (PMC) bank.

The court was informed that those in need of money due to emergencies like medical treatment and marriage can approach the RBI executive and get Rs one lakh. However, not satisfied with the RBI affidavit, the depositors protested outside the high court.

On September 23, the RBI had imposed regulatory restrictions on the PMC Bank for six months over alleged financial irregularities. Many depositors have filed petitions in the HC challenging this cap demanding that they should be allowed to withdraw more amounts.

On the last date of hearing, the HC had directed the RBI to file an affidavit stating details of steps taken to safeguard the interest of the depositors.

The RBI, in its affidavit, has said, “To mitigate the hardships of the depositors, the RBI has enabled withdrawal beyond the stipulated amount on hardship grounds like medical treatment, marriage, education, livelihood and other hardships, subject to a ceiling of Rs one lakh on medical ground and `50,000 in other cases.”

RBI counsel Venkatesh Dhond contended before the division bench of Justice S.C. Dharmadhikari and Justice R.I. Chagla that such withdrawal restrictions were necessary to safeguard the interests of the bank and its depositors.

He also informed the court that depositors facing hardships can approach the RBI-appointed administrator and seek withdrawal up to Rs one lakh.

Refusing to interfere with the RBI’s decision of restricting the withdrawal, the bench said that the depositors cannot say that their rights are superior to that of the bank’s. The court’s response was to the arguments of one of the petitioners’ lawyer Pradnya Talekar who had said that depositors should not bear the brunt of wrongdoings done by senior officials of the PMC bank and that the RBI cannot impose such withdrawal restrictions.

The bench also asked how can this court say that the action initiated by RBI is contrary to the public interest or the depositor's interest. After perusing the affidavit, the court deferred hearing on the petition on December 4.

Speaking to The Asian Age, another lawyer Eknath Dhokale said, “Reply of the RBI has not disclosed anything new, raising the withdrawal limits can’t be said as steps taken to protect the depositors.”

The crisis at the bank is attributed to the loans allocated to realty firm the Housing Development Infrastructure Ltd (HDIL) without scrutiny. These loans later turned into non-performing assets (NPAs).