Under the slogan ‘Did You Know?’ Sena is promoting development works carried out in the last five years. 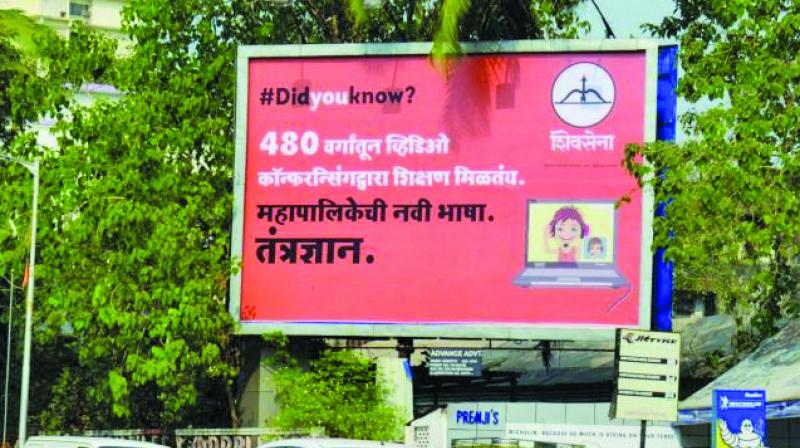 A ‘Did You Know?’ hoarding put up by Shiv Sena.

Mumbai: While the alliance between the Shiv Sena and Bharatiya Janata Party (BJP) is yet to be finalised for the Brihanmumbai Municipal Corporation (BMC) polls, a cyber war has already broken out between them. Messages mocking Sena’s “Did You Know’ campaign have started doing the rounds on social media saying it is trying to claim credit for BJP’s works.

Sent in the name of a ‘BJP Karyakarta,’ these messages take pot-shots at the Sena’s campaign, which has already become the talk of the town. Under the slogan ‘Did You Know?’ Sena is promoting development works carried out in the last five years.

Sena chief Uddhav Thackeray’s announcement that his party would waive off property tax for tenements measuring up to 500 sq ft area has been targeted by BJP. “Sena is trying to take credit for BJP’s works. The decision to waive off property tax for tenements of 500 sq ft was already taken by CM Devendra Fadnavis. It was approved by the state cabinet on May 27, 2015 at BJP’s insistence,” said the message.

A few months back too, such messages were circulating on social media targeting Shiv Sena. Calling its long time alliance partner a ‘Tender Sena,’ the messages had said the party is trying to protect the “mafia-clad Ravan” in the BMC. “The campaign is a fitting reply to the defamatory campaign started by the Sena. Despite being in the government at Centre and State, they are targeting BJP and their leaders. So we want to expose them,” said a BJP insider.

However, Shiv Sena-nominated corporator Avkash Jadhav said, “Those who are spreading these messages are doing so with insecurity and fear that Shiv Sena will win the BMC polls.”