Two firemen were injured in the blaze that took place at a garage in Santacruz-Chembur Link Road. 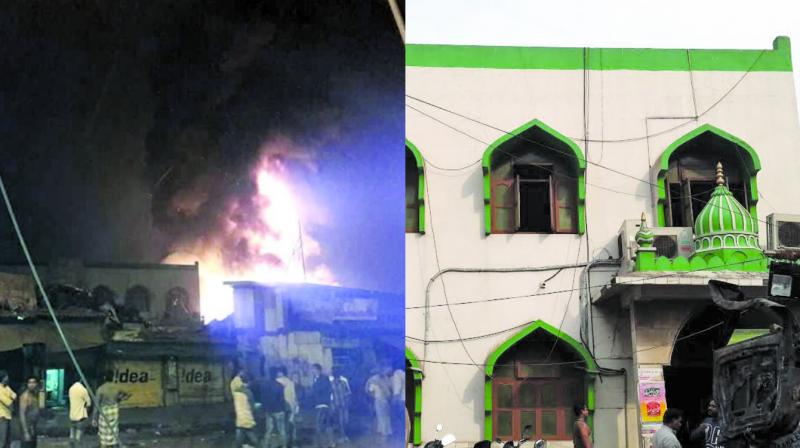 Flames erupt from the garage that caught fire, and the mosque where the victims took shelter.

Mumbai: A massive fire erupted at a garage on the Santacruz-Chembur Link Road (SCLR) near Bandra Kurla Complex (BKC), where two firemen sustained injuries in the rescue mission. The fire call was made at 1.30 am on Friday and the fire was extinguished within three hours, with the fire being reported at Level-4 intensity. 25 hutments and godowns containing car spare parts, cloth fabric and glass, among other scrap material engulfed in the fire. The godown also housed gas cylinders which exploded in the fire.

According to a fire official, 14 fire-tenders along with seven water tankers and two ambulances were rushed to Kapadia Nagar of Kurla (west). Two firemen, Rajesh Rathod (30) and Nikhil Shinde (26), sustained minor injuries on the arm and eyes, respectively, during the rescue mission. Both were rushed to the civic-run Sion hospital and were treated for the injuries.

Speaking to The Asian Age, chief fire officer (CFO) of Mumbai, P. S. Rahangdale said, “There were a total of three explosions of LPG and Oxy Acetylene cylinders. No casualties were reported but two firemen were injured. The fire was brought under control at 4.30 am on Friday morning. We will investigate the matter further and ascertain the cause of the fire.”

The residents alerted the fire control room when they saw the garage ablaze in Kapadia Nagar, which was followed by blast sounds that were heard back to back, spreading panic. One of the onlookers, Sajid Shaikh said, “The families which witnessed the fire at Kapadia Nagar took shelter in the mosque in the same vicinity. There was a large crowd that had gathered on the footpath alongside the fire spot.