The officials said that the Mumbai division itself has six flying squads to monitor examinations at all the 583 centres. 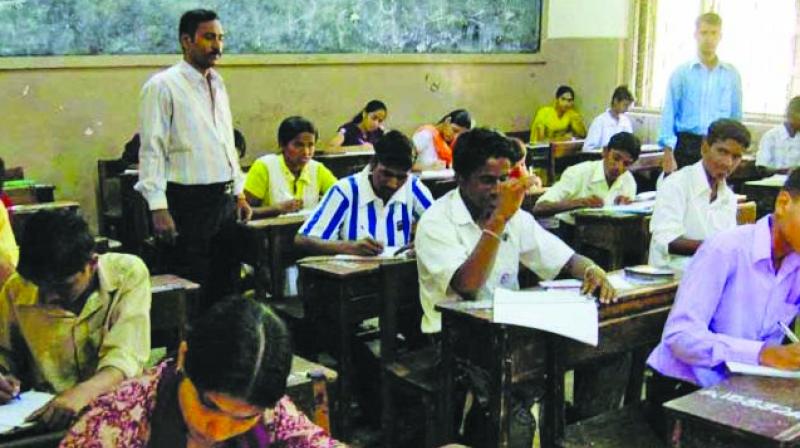 A total of 3,330,823 students from 583 centres in the Mumbai division, which includes Mumbai, Thane, Raigad and Palghar district will be appearing for the examination which begins on Wednesday.

Mumbai: In the run up to the Higher Secondary Certificate (HSC) examinations which begin from Wednesday, the Maharashtra State Board of Secondary and Higher Secondary Education (MSBSHSE) has undertaken various measures to ensure there are no paper leaks and kind of malpractice.

This includes six flying squads, special women constables and barring mobile phones at the examinations centres for both students and staff.

To avoid paper leaks, the question papers will be sealed in an envelope, which will be only opened at the classroom with two students present as witnesses for this process. All these procedures have been introduced after six question papers for the academic year 2016-17 were leaked on social media sites. “Each envelope will have 25 question papers which “will be for a single block (classroom) that will be unsealed in the presence of two students and a supervisor. Last year, during this process certain photos were clicked and circulated on social media. But this year when the question paper envelope will be opened inside the classroom, there is no way anyone can click pictures,” said Mr Subhash Borse, in-charge secretary of MSBSHSE, Mumbai division.

Unlike last year, where students were given a buffer time of 15 minutes to enter the examination hall after the exam time, this year the doors will be closed sharp at 11 am. “The reporting time is between 10 am to 10:30 am, so we have instructed students to reach the classroom by then. Anyone coming late or after the aforesaid time, won’t be entertained,” Mr Borse added.

Students will be handed their answer papers so that they can fill their details, like seat number, subject name, language in which the answers will be written, question paper code, centre code and division name by 10:40 am Along with this, they are also supposed to stick the barcode label on the answer paper according to the instructions provided by the supervisor. By 10.50 am, the sealed envelope will be brought inside the class by the supervisor. “From 10.50 am to 11 am, the unsealed envelope will be opened and the , removing and segregation of papers will begin. At 11 am sharp, the classroom will be closed and question papers will be distributed among the students,” said another official.

The officials said that the Mumbai division itself has six flying squads to monitor examinations at all the 583 centres. All other regions in the state have only one flying squad. The reason being that Mumbai has reported a large number of cheating cases and papers leaks in the past years.