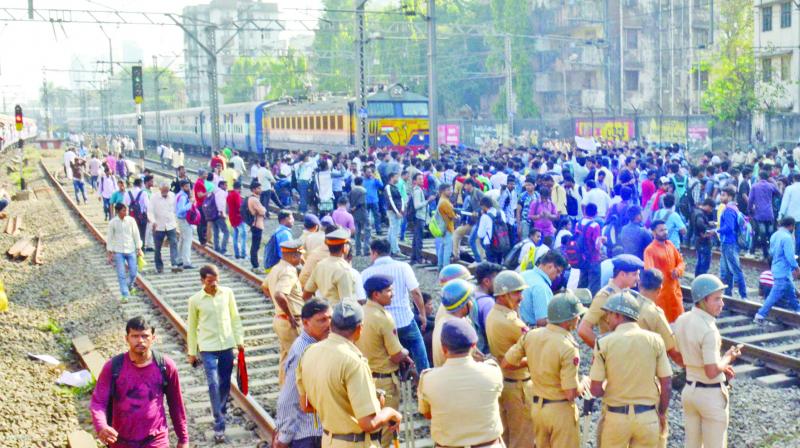 Mumbai: Tuesday saw three-and-a-half hours of protests by thousands of students seeking railway jobs (group D) who blocked the tracks between Dadar and Matunga on the central line.

The agitation was called off only after the government assured the protesters that their demands would be met. The agitators agreed to discuss the matter with the Railway Board.

The railway appoints apprentices for various technical jobs in its workshops across India. Earlier, these apprentices were absorbed into the railway however in 2016, the railway ministry decided to stop the system and instead offer them just a 20 per cent quota.

On Tuesday, over 2,000 students from across India who have completed apprenticeship and want permanent jobs with the railway, sat on the railway tracks at about 6.45 am. The agitators, members of the All India Railway Act Apprentice Association (AIRAA), demanded scrapping of the 20 per cent quota for direct recruitment, and jobs for candidates from all states who had cleared the All India Railway Act Apprentice Exams.

The AIRAA agitators revealed that they had planned a flash strike in Mumbai two to three days ago on their WhatsApp group, thinking that such action in the country’s financial capital, with its active media, would attract the attention of decision makers in Delhi. They said that they had earlier staged protests at Delhi’s Jantar-Mantar but drew a blank.