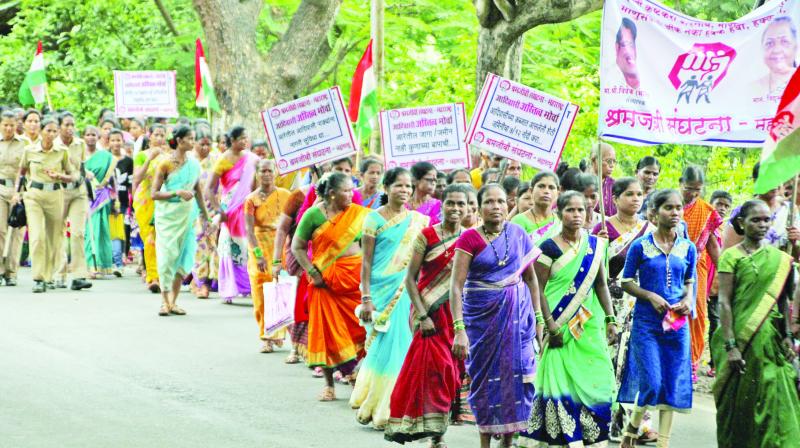 The adivasis claimed that extension of zoo would affect their livelihood. (Photo: Mrugesh Bandiwadekar)

Mumbai: Around 2,500 tribal residents from Aarey colony’s 27 adivasi padas on Tuesday held a march from Picnic Point to the Aarey CEO’s office to protest the BMC-state government plan to build an extension of Byculla zoo in Aarey colony. The residents claimed that constructing an extension of the zoo on agricultural land would affect their livelihood.

They said that at least six adivasi hamlets would be affected, with families from Bohrikhan pada, Gaodevi pada, Khambacha pada, Jivacha pada, Marol Maroshi pada, and Sai Bangoda pada losing their farmland. Sai Bangoda is home to 350 families; and Gaodevi and Bohrikhan to 50 and 80 families, respectively.

The protest which began around 12pm on Tuesday saw participation from over 2,500 adivasis. All those who participated in the morcha stand to lose their homes and also farming, which is their livelihood. According to the Forest Right Act 2006, all adivasis are entitled to land in forest areas to carry on farming or sell forest produce without disturbing the forest.

Prakash Bhoir, an adivasi from Kilti pada, said, “We have been residing here since long and have been paying taxes according to the adivasi quota. In recent years, there have been encroachments by outsiders in Aarey colony; these people are not
adivasis.

The government, along with them, wants to shift us to SRA. We are strictly against moving out of Aarey as not only us but our animals and the biodiversity around us too will suffer.”

Aarey dairy CEO, N.V. Rathod, told The Asian Age, “The issues concerning adivasis are dealt with by the state tribal department. However, I will be writing to the state
government about the same.”