Deadly organism spotted at the beach

According to marine experts, its sting is painful and can often prove fatal too. 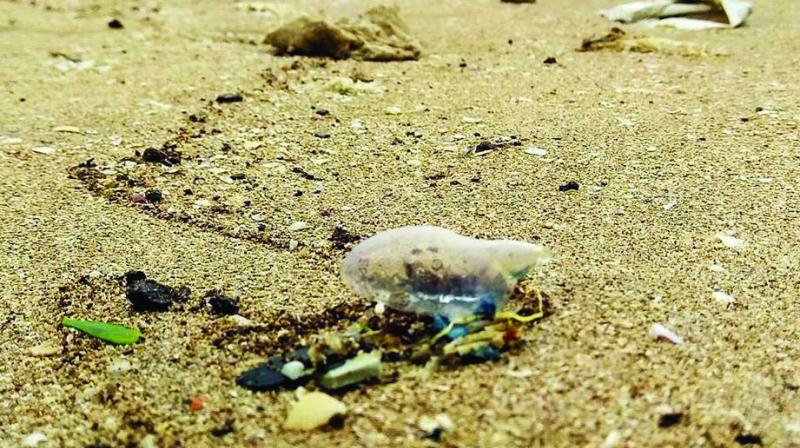 Mumbai: If you go to Girgaum Chowpatty, beware of the blue-coloured jellyfish like creatures. Portuguese Man O’ War or commonly known as Blue Bottle are venomous marine organisms that wash ashore on city’s coasts during Monsoon. Few of these were washed ashore on Girgaum Chowpatty on Friday. According to marine experts, its sting is painful and can often prove fatal too.

Members of the ‘Marine Life of Mumbai’, a group that conduct walks along Mumbai’s coasts encountered four Blue Bottles on the Girgaum Chowpatty. Pradip Patade, a member of the group and a marine expert stated that there is nothing to panic as they were fewer in numbers, however it is advisable to stay alert.

“It is not as alarming as the last year, when around 30 Blue Bottles were seen on the same beach. But many people may get allured by it due to its beautiful bubble-like appearance and try to touch it. Its sting causes unbearable pain and welts, and often lead to muscle weakness,” said Mr Patade.

The specie is different from jellyfish and has venomous tentacles whose sting helps them paralyse their prey. Blue bottles also detach their tentacles, which may remain for days on the beaches or get carried away in the waters; as such swimmers are advisable to not enter the sea during their appearance. “Even if the Blue Bottles appear dried out or dead on the beach, one should not step on them, as their tentacles still has the potential to sting you. And once stung, do not rub it and rinse with salt water to remove tentacles,” he added.