Adding to the rain woes for Mumbaikars, was the mega block on Central Railway and a partial block on Western Railway (WR). 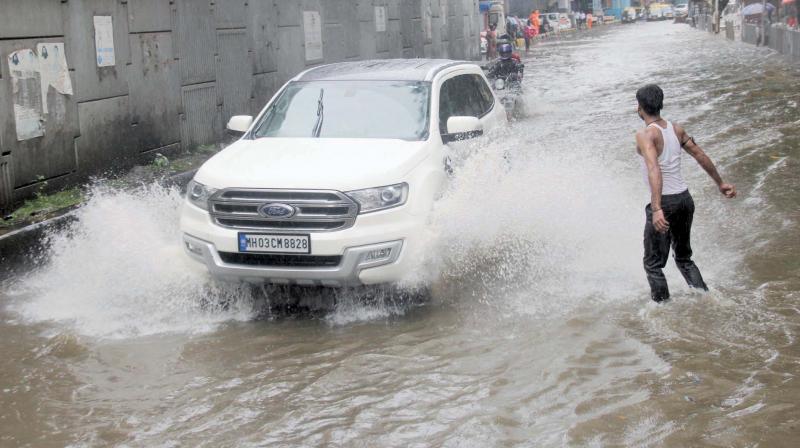 A car wades through water on a road in Hindmata. (Photo: Debasish Dey)

Mumbai: The city witnessed heavy showers on Sunday, leading to water-logging in many areas of Andheri and Bandra east and traffic snarls in several others. Mumbai was lashed by showers on Saturday too. The city will continue to receive heavy showers till Tuesday, said the weather department. According to information released by the civic body, six complaints have been received against short-circuit, 11 complaints about trees crashing down, as well three instances of building collapses.

Deputy Municipal Commissioner (DMC), Sudhir Naik said the city and its suburbs experienced heavy rains from Saturday night onwards. On Monday, the city will also experience high tides of 4.68 metre at 11.49 am, hence the BMC has alerted Mumbaikars to stay away from the beaches so as to avoid mishaps.

Water-logging was reported from the Andheri subway and Bandra after Sunday’s heavy downpour. “In order to avoid water logging problem, sufficient number of dewatering pumps were placed in low lying areas of the city,” said Mr Naik. And for those unfortunate enough to be on the road, traffic snarls were seen at various parts of the city, like SV Road and JVLR.

Adding to the rain woes for Mumbaikars, was the mega block on Central Railway and a partial block on Western Railway (WR). Services on CR were totally suspended between Karjat and Kasara to Kalyan from 9.15 am to 12.25 pm on all lines. The harbour line saw services between Panvel and Kurla being suspended intermittently from 10.30 am to 4.30 pm as work was underway between Chunnabhatti and CST. On WR, services were suspended on the fast line between Borivali and Bhayander.