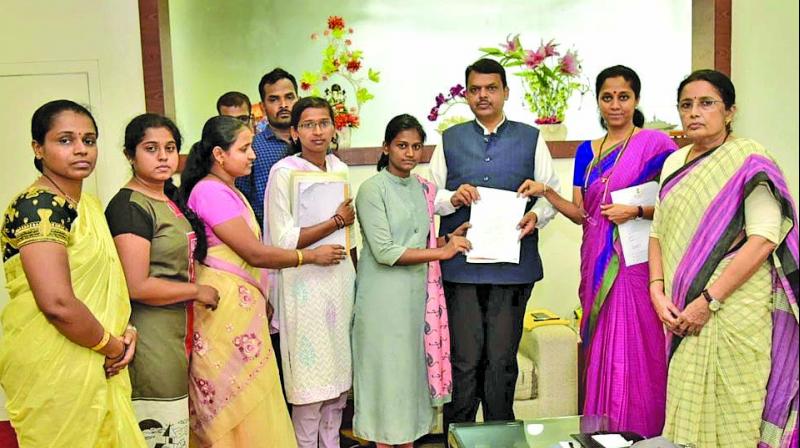 Sule along with the CM and activists at Varsha.

Mumbai: The National Congress Party (NCP) on Friday reiterated its stand against setting up a car shed for Metro 3 at Aarey Milk Colony after its member of Parliament (MP) Supriya Sule met chief minister Devendra Fadnavis at his official residence ‘Varsha’ to discuss the issue.

Ms Sule along with another NCP leader Vidya Chavan and activists requested the chief minister to consider the sites at Kalina and Kanjurmarg for the car shed instead of cutting 2,646 trees in Aarey. However, NCP sources said that there was no positive response from Mr Fadnavis on the same.

“We requested Mr Fadnavis to look for other options as many citizens are opposing the car shed in verdant area of Aarey. Tribals of the colony apprised Ms Sule with the ground reality when she visited the site. Various organisations have also suggested options for car shed. The NCP is completely against the massive cutting of trees,” said Ms Chavan, an MLC from NCP.

Member of Aarey Conservation Group, Priya Mishra said, “The state government counsel admitted in the Bombay high court on Thursday that the plot in Kanjurmarg is owned by the government and it is not a disputed land. We pointed out the same to Mr Fadnavis. We also highlighted the option of Kalina which was proposed in the 2015 expert committee report”.

The state had earlier said that the land in Kal-ina is needed for expansion of the university the-refore it cannot be used for the car shed.

Mumbai general secretary of national student Congress Fukran Shaikh said that there was no positive response from the CM over the issue.

Earlier, the NCP had received criticism after its corporator Kaptan Malik voted in favour of cutting trees in Aarey.